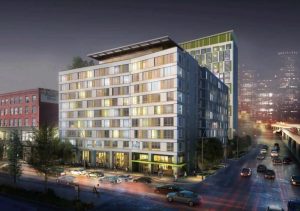 Troy Boston in the South End / rendering by ADD Inc.

Boston – T&T Electrical Contractors, based in Everett, has completed the electrical construction of Troy Boston, a 378-unit apartment building located at 275 Albany Street in Boston’s South End. The development includes 38 residences that are classified affordable housing.

Troy Boston is a 334,000sf development, composed of two connected towers, an 11-story structure, and another that rises 19 stories. The residential/mixed-use project includes 6,000sf of retail shops and restaurants at ground level. The development includes an above-ground parking facility for 180 vehicles.

Troy Boston is expected to achieve LEED Gold certification as its energy-efficient systems are designed to save more than 1,379,700 kW hours of electricity and more than 3.8 million gallons of water.

More than 95% of all lighting installed by T&T at the facility is LED lighting, consuming approximately 20% of the power of conventional lighting.

Amenities include a yoga and fitness studio, an outdoor pool and a rooftop terrace complete with a demonstration kitchen and dining area, barbecues and fire pits.

BIM coordination was critical to the project from its earliest planning stages, as it enabled T&T to navigate a virtually impassable pathway due to numerous underground obstacles, including structural caps and piling.

In a unique aspect of the project, the NSTAR vault that provides power to the facility was among the last phases of the project to be completed, as T&T started all electrical distribution from the middle and worked in two directions simultaneously in order to keep the project on schedule.

The first mid-rise was completed in March 2015 and final turnover was in June 2015.