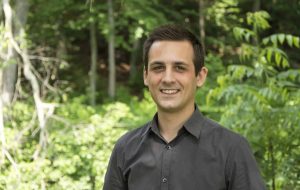 The award, sponsored by the AIA Connecticut Emerging Architects and Design Committees, recognizes and supports emerging graduate architects who have made significant contributions to the profession or have rendered distinguished public service.

The honor was bestowed to Trahan at the AIA Connecticut 2017 Awards on Dec. 4 in Hartford, Connecticut. He is Centerbrook’s first recipient of the award, now in its fourth year.

Trahan has been a member of the Centerbrook design staff since 2013. The New London, Connecticut, resident has worked on a variety of project types, including: research laboratories, religious institutions, mixed-use, higher education and residential.

“Aaron is an extraordinary designer, a respected leader among his colleagues, and a kind and generous advocate for the architectural profession,” said Centerbrook Principal Todd Andrews, AIA who nominated Trahan for the award. “Aaron has thoughtfully presented creative design solutions while actively collaborating with colleagues and owners on a variety of project types. He also embodies community advocacy through his volunteer work in New London.”

Trahan has served on the NCARB Education Committee and on the Board of Directors for the New London Landmarks. At Centerbrook he is member of committees that research and establish best practices for library projects as well as for retail and mixed-use.

A Centerbrook project, the Hotchkiss School Biomass Heating Facility, was also recognized at the AIA Connecticut 2017 Awards. It was voted the Connecticut Treasures Award winner earlier this year.