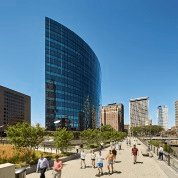 Hartford, CT – Towers|Golde is the recipient of the 2016 CT ASLA Award of Excellence for The Phoenix Plaza.

While respecting this historic building and its midcentury aesthetic, the main charge for the designers was to reduce paving, facilitate circulation, integrate with the scale of the building, while humanizing the scale at the level of the pedestrian.

In the new design, the primary circulation through the plaza was maintained and pedestrian boulevards created. The remainder of the site was planted with a mix of plants that thrive in exposed, dry conditions. Half of the plaza paving was turned into planted areas, which resulted in reduced installation costs.

The building, which was renovated and received LEED Silver certification in 2010, now has a more appropriate and sustainable setting. The plaza has been modernized for today’s requirements while remaining true to its midcentury roots. 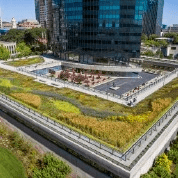 Planting plays a significant role in providing continuity and enclosure as well as environmental benefits. The layering of plants heightens the sensory experience and gives one the illusion of being transported out of the city. Inherited structural load limits affected media depth and types of plants that could be used.

Constructed in 1963, this iconic midcentury modern structure was the world’s first elliptical lenticular cylinder building and played a pivotal role in the city’s urban renewal movement.  Designed by Harrison & Abramovitz, the building construction was headline news at the time and since has become one of the city’s most recognized buildings as well as being listed on the National Register of Historic Places.

Comprised of 79,000sf of mortared brick, the plaza displayed the monumentality of many midcentury urban spaces.  The Plaza remained relatively unchanged for almost 50 years until the required replacement of the roof membrane provided opportunity for the plaza to be reimagined to more closely reflect today’s sensibilities and concerns for the environment.  Furthermore, today’s use of the space was very different than when constructed as at that time the plaza was isolated from its surroundings.  The plaza is currently situated at the intersection of pedestrian traffic and is a primary access point to the river.  As such, the plaza is now more focused on movement through the space than when first constructed.

The “boat” building, as it was affectionately called, shortly after construction in 1963.  A modernist marvel at the time, the original plaza was isolated from its surrounding context with the exception of the strong visual connection to the river.

The asymmetry and openness of the plaza was typical of the modernist tradition.  Firmly seated in the modern era in which it was constructed, the open and unstructured podium had lost its purpose and appropriateness for the present. Originally isolated from its surroundings the podium currently provides significant pedestrian connections.

The expanse of green roof greatly reduces the heat island effect, retains much of the rainfall during the year and modulates the building temperature through the seasons.

Pedestrian circulation is a primary function of this private/public space.  The enhancement of these circulation routes was achieved by the introduction of long arcing planters and smaller trees that relate to the scale of the pedestrian while expressing movement through the site.

Through the use of relatively few materials, the plaza was transformed to an updated yet appropriate setting for this historic building.

In part due to limits on allowable live loads, a barrier was required for the planted areas to prevent access but maintain visual transparency.  Existing monumental benches were relocated and reused when possible.  The introduction of stylistically appropriate LED light fixtures increased safety, conserved energy and complemented the building aesthetic.

Walls and planting extend the eye and complement the shape of the building.  The juxtaposition of man made materials with the natural plantings amplifies the interest.

The main building entry was reinforced through the placement and alignment of the planters.

The iconic building shape was reflected in numerous design elements such as the plant barrier where top rail and cable connectors were shaped to reinforce the building aesthetic.  The cables of the barrier effectively disappear allowing the planting to emerge dominant

Although the overall paving area was reduced dramatically, the new alignments appear more generous while more effectively accentuating the architecture.

The planted area not only improves one’s experience while on the plaza, it also anchors the surrounding urban context more effectively resulting in the 2 acre site becoming a better neighbor and perceptually less unfriendly.

The scale of the plantings relate to the surroundings and the geometry of the groupings generates visual movement through the site.  The view and the experience changes as one moves, defying a single reading of the site from one vantage point.  The waves of planting echo the river beyond.