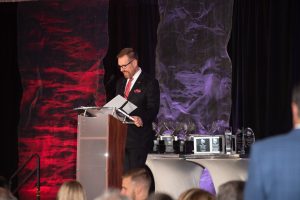 Joshua Reap, president and CEO of ABC NH/VT, at the podium

Top scoring projects were showcased at the evening program, with a total of 12 projects receiving an “Excellence” or “Merit” award.

“We were thrilled by the quality and caliber of projects recognized at the event,” said Josh Reap, president and CEO of ABC. “On display was the best of the industry. The projects and the local companies that built them are truly world class.” 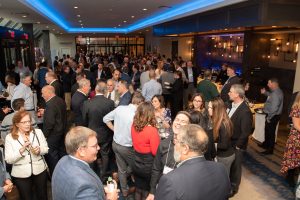 The crowd networks before the awards ceremony. 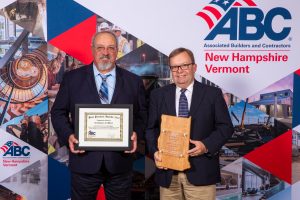 ABC NH/VT also awarded the coveted Chairman’s Award to Cianbro Corporation for its Sarah Mildred Long Bridge Replacement. The Chairman’s Award recognizes the highest winning project that best represents the industry and region. This title holds the highest honor after having been evaluated diligently.

Videos of each project can be viewed here.

The Excellence in Construction awards program is the industry’s leading competition that honors both general and specialty contractors for innovative and high-quality merit shop construction projects. The award honors all construction team members including the contractor, owner, architect, and engineer. The winning projects, selected from entries submitted from across Vermont and New Hampshire, were judged on complexity, attractiveness, unique challenges overcome, completion time, workmanship, innovation, safety, and cost. A panel of industry experts served as the competition’s judges.