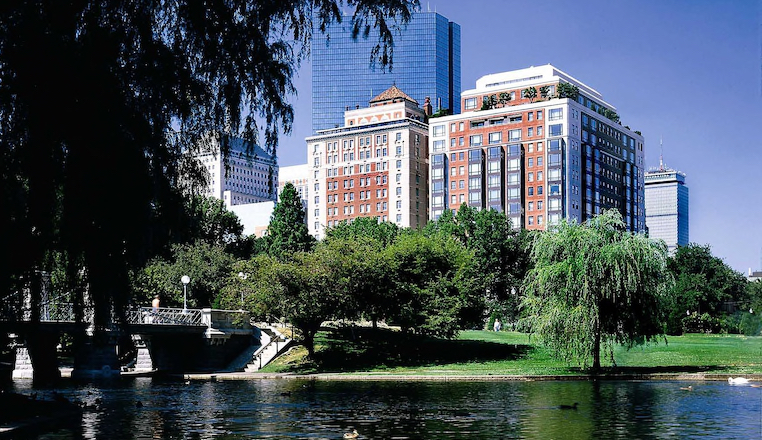 Boston – Aldon Electric Company, based in Weymouth, has reached substantial completion of the historic renovation of The Newbury Boston hotel at the corners of Arlington and Newbury Streets in the heart of Boston’s Back Bay.

Electrical distribution requirements encompassed installing new electrical panels on each floor of the two buildings, which provide power to all hotel rooms and public spaces. The project also features elaborate new interior and exterior lighting and a state-of-the-art Lutron lighting control system.  The contractor also rebuilt one of the facility’s two generators.

Among many demanding challenges met by the NECA contractor was installation of the hotel’s new fire alarm system, which consists of three network NODE panels and six network transponders. The parallel fire alarm installation required networking the existing life safety system with the new system until all floors were cutover and devices were installed throughout both high-rise buildings.  New stair pressurization systems have also been installed.

Teaming with its subcontractor, Comm-Tract, on low-voltage installations, Aldon’s scope also included the facility’s tel/data systems. Features include a new data network, AV installations in public spaces, and an entirely new speaker system.  Installation of security system raceways for the security system were also integral to the scope.

Construction on the fast-track, multi-phase project was performed while the building was partially occupied: Floors 8-18 of the building facing Commonwealth Avenue operate as a luxury condominium residence. Aldon met these logistical challenges as well as material delivery and scheduling challenges presented by the tight site in the Back Bay.

The Aldon project team has met project timelines working in close coordination with general contractors Columbia Construction and Consigli Construction.  The project was scheduled for a March 1 completion and the The Newbury is scheduled to reopen to guests by mid-March.

The landmark hotel property, built in 1927, was the first Ritz-Carlton Hotel in the U.S. and operated as the Ritz Boston until 2007, when it was sold to Taj Hotels to become the Taj Boston.  In 2018, Highgate Hotels purchased the property to “restore the character and landmark status of the hotel, rebranding it as The Newbury Boston.”

COVID-19 impacts were considerable, as the project faced a two-month shutdown. Aldon Electric was able to accommodate the owner’s project schedule with strict adherence to safety protocols and extended night and weekend shifts.

Allen Mullaney, principal of Aldon Electric said, “We are proud to work on the restoration of The Newbury Boston. The historic property has long been synonymous with the finest in the hospitality industry and the The Newbury promises to continue in that tradition as it has been updated with the finest finishes and meticulous attention to detail throughout the property.”