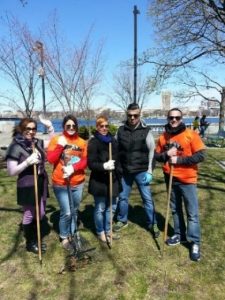 With participants at multiple locations between Bellingham and Boston, all volunteers came together to beautify the banks of the Charles River, positively contribute to the overall water quality, and develop a connection to one of Eastern Massachusetts’ most precious natural resources. As part of the greater American Rivers’ National River Cleanup, the Annual Earth Day Charles River Cleanup has contributed to the removal of over 4 million pounds of trash from America’s waterways.

“At The Kensington, we enjoy finding ways for our residents and staff to get involved and give back to their community,” commented Drew Boujoulian, resident services manager at The Kensington. “The strength and bond of Massachusetts is shown through events such as these when everyone comes together as one. We hope that our contribution in the Earth Day Cleanup will lead to improved health of the Charles River and overall environment.”

Cleanup supplies including gloves and trash bags were provided for participating volunteers, as well as an Official 2015 Charles River Cleanup t-shirt.

Notably, The Kensington has been a continuous supporter of its local community, having participated in numerous charitable activities since opening in 2013. Prior to the Earth Day Charles River Cleanup, The Kensington partnered with the nearby Saint Francis House, the largest day-shelter for homeless men and women in New England, who dubbed March as “Kensington Month.” Through the Saint Francis House, staff members and residents of the luxury apartment tower were given numerous opportunities to engage their local community through various charitable efforts.

Currently leased at 98%, The Kensington provides a sought-after location in downtown Boston and convenient access to Downtown Crossing and the Financial District, as well as Beacon Hill, the South End, and Back Bay.