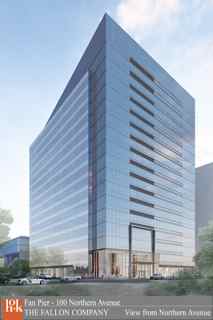 Designed by global architectural firm HOK, 100 Northern Avenue will feature 500,000sf of commercial space, 380,000 of which will be occupied by Goodwin Procter, that currently plans to relocate to the new building by Spring 2016. The building also features more than 15,000sf of premium ground floor retail space.

Located adjacent to Boston’s prestigious Institute of Contemporary Art on Fan Pier and overlooking the site’s public green and six-acre marina, 100 Northern Avenue will offer many compelling amenities: convenient access to public transportation including South Station, a water taxi to Boston’s Logan Airport and the financial district, Hubway bikes and easy access to several highway exchanges, as well as a myriad of dining and shopping options.

The groundbreaking of 100 Northern Avenue is part of The Fallon Company’s next wave of development on Fan Pier. Most recently, it started construction on the site’s first residential project, Twenty Two Liberty, a 14-story, 118-residence condominium building currently under construction that will offer sweeping views of Boston Harbor and the Boston skyline once completed in 2015.

“Today’s groundbreaking is another indication of the progress and momentum taking place at Fan Pier, and is a testament to the dynamic neighborhood being established on Boston’s waterfront,” said Fallon. “Its location, amenities and opportunities are a huge draw for some of the world’s leading companies, like Goodwin Procter, which is looking to provide the best environment for its most important asset: its employees.”

With the 100 Northern Avenue groundbreaking,  Fan Pier, a joint venture of the Fallon Company and Mass Mutual as advised by Cornerstone Real Estate Advisers, features five high rise structures Two Liberty, which broke ground in October 2013. When complete, the Fan Pier neighborhood will feature a total of eight contemporary commercial and residential luxury high rises, offering sweeping views and the best in dining, shopping and recreation on Boston’s historic harbor.