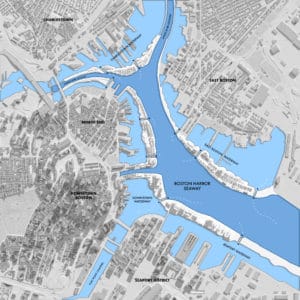 We now know that Boston will experience an existential threat from sea level rise within the century, or more catastrophically, in the nearer term. The question for future generations will be, “What did the 2020 Bostonians do about it?” The Blue Necklace is a project that attempts to answer that question, pulling together a multi-disciplinary team to develop a response. Boston’s current strategy of creating flood-able infrastructure, locally resilient buildings, and strengthening the existing water edge meets today’s challenges from storm surge and king tides. The Blue Necklace addresses the anticipated permanent and significant sea level rise, extending new land within the harbor to protect the city, while creating opportunities for open space and development. 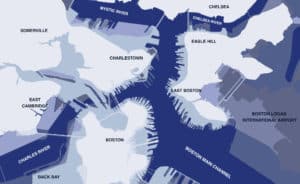 The past or the future? Map of Boston’s land making would be reversed if sea level rise is not contained / LAB LSA, Carlton Smith

With this project, we are researching a comprehensive plan to ensure the protection of East Boston, Charlestown, the North End, Downtown and the Seaport. The guiding principles are to prevent the inundation of existing neighborhoods, retain current waterfront property, create new opportunities for recreational engagement with the water, maintain critical sea access for the Coast Guard and shipping ports, and fund the project in a socially equitable way through a progressive tax on the development of the new made land. 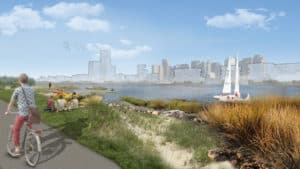 The Blue Necklace recalls one of Boston’s most visionary urban designs from the 19th century, Olmsted’s Emerald Necklace, championed by Charles Eliot. As Nancy Seasholes has compiled in the book, “Gaining Ground”, and Alex Krieger has demonstrated in “Mapping Boston”, Boston’s history of urban growth has been hydrophilic, continually making new land from rivers, marshes and the sea. Over 5,000 acres of made land extending from the original peninsulas of 1600s Boston comprise our current map. With that history, 2020 Bostonians could view new expansion towards the sea as a natural response to sea level rise. Conversely, if water encroachment is left unchecked, future maps will reflect a reversal of growth, eventually returning the city to the original Shawmut peninsula. 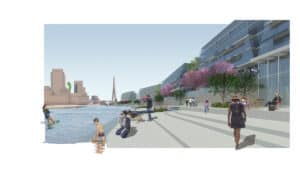 The coastline increases by four-fold, providing enhanced access to the water for recreational use. / LAB LSA, Stephanie Goldberg and Mark Reed

The project creates a series of linked islands, creating city-side waterways, interspersed with locks that allow access to a higher sea. By nature of this project, the coastline will be increased four-fold. The shores facing the sea would have native grasses and landscapes softening the impact of waves and surges. The inner waterfronts would be more urban, providing direct access to the water for recreation and enjoyment. In total, the proposal creates 150 acres of new land, 30 million square feet of built development and 30 thousand linear feet of sea wall. The hope is to provide opportunities for affordable housing, cultural amenities, open space and business use.

As the project is complex, so too are the issues that need to be addressed. Social equity, costs, phasing, hydrological and environmental concerns, transportation and urban design go hand in hand with an in-depth study. Throughout the world, rising seas will be affecting coastal communities and those inland as well. While we all seek to mitigate the causes of climate change, it is still vital that we address the challenges we know we will face. Cities are never static. The question is where we go next.

Mark Reed and Stephanie Goldberg are founding principals of Boston-based architecture firm, LAB LSA and winners of the Boston: Living with Water international design competition. They are indebted to the design thinking and efforts of Nick Perez, Carlton Smith, Cody Uliasz and Len Osborne, all members of Blue Necklace project.