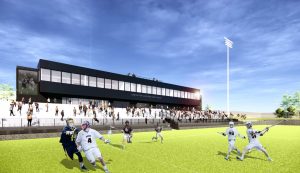 Spectators will enjoy an expansive, modern grandstand and a new scoreboard, as well as concessions and restrooms located on a concourse level. The building will have event space for game day hosting and team gatherings, and players will have direct access between team locker rooms and the field through a tunnel.

Fundraising for the complex, targeted for completion by the 2020-21 school year, is well underway.

Kia McNeill, head coach of women’s soccer, said that a state-of-the-art lacrosse and soccer facility like the one planned at Brown is rare at the college level and its presence will greatly expand the university’s ability to recruit top student-athletes.

“This is every coach’s dream to have a sport-specific stadium like this with new offices, meeting space, a training room, all in one,” McNeill said.  “A facility like this is not only going to be one of the best stadiums in the Ivy League; I think this will be one of the best stadiums in New England and beyond. It’s going to have massive effects on our program and our success going forward.”

With a combined 42 Ivy League championships and 47 NCAA tournament appearances among them, Brown’s lacrosse and soccer programs, with both women’s and men’s teams competing in each sport, have long track records of success.