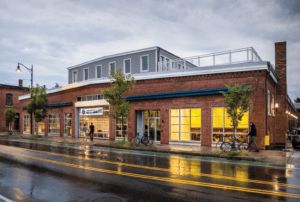 Somerville, MA – Silverman Trykowski Associates (STA), an interior design firm based in Boston, has completed the newly opened Global Center for Cleantech Innovation, that is part of the Greentown Labs urban campus in Somerville.

The newly added Global Center is a rehabilitated 100-year-old industrial building that was originally built for the American Tube Works Company that produced seamless brass and copper tubes for locomotive, marine, and stationary boilers. 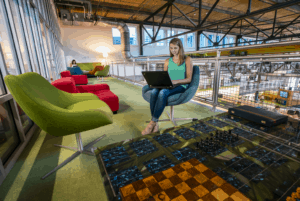 An informal lounge space, overlooking workspace and the town green

Silverman Trykowski Associates transformed the brick-and-steel building to house modern-day makerspaces for the next generation of ground-breaking technologies — a proverbial bridging of 1900’s energy-producing innovations with 2000’s world-changing cleantech innovations.

The $15 million project is a sustainably built facility that has more than doubled the Greentown Labs footprint to a combined total of 100,000sf of innovation space. Greentown is currently home of nearly 100 cleantech member companies.

With the addition of this new 56,000sf showcase facility, Greentown Labs has cemented its position as the largest cleantech incubator in the U.S.

“The commonwealth’s innovation economy is thriving because of entrepreneurs like the ones that will be supported by this newly renovated and expanded facility,” said Massachusetts Governor Charlie Baker at the Greentown opening ceremonies in May 2018.