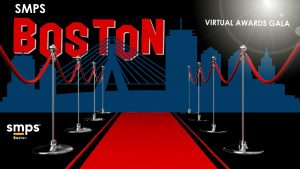 Boston – On June 25, SMPS Boston hosted its first-ever Virtual Awards Gala, celebrating member achievements in both marketing and communications. Due to the pandemic, this year’s awards were virtual.

HP’s publisher, Anastasia Barnes, was the master of ceremonies for the gala, which most attendees dressed up for. Members were also encouraged to vote for “best dressed” and “best creative cocktail.”

The following are this year’s award winners:

After the announcement of Best-In-Show, Lisa Frisbie, SMPS in-coming president, announced the 2020-2021 board of directors.  Barnes concluded the evening by announcing three final awards, which included the following: