PROCON and Waypoint Team Up 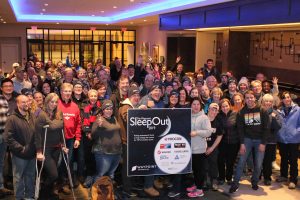 Manchester, NH – On March 22, Waypoint of New Hampshire was joined by business leaders, advocates, and supporters at the Stanton Plaza in Manchester for their fifth annual SleepOut. The event raises awareness and critical funds for homeless and at-risk youth in the community. Among the attendees were New Hampshire Governor Chris Sununu, Congressman Christopher Pappas, and Manchester Mayor Joyce Craig, who locked arms in support for the worthy cause. 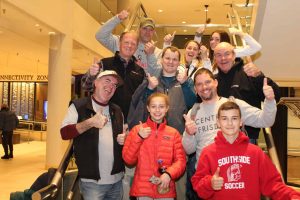 SleepOut participants experienced a single night under the Manchester sky in solidarity with homeless youth. Approximately 130 sleepers raised an astounding $333,500 that will be used to support the Youth Resource Center in Manchester and the Street Outreach initiatives throughout New Hampshire.

This year, PROCON sponsored the event with a $20,000 donation, and the Stebbins family pledged to match $10,000 in donations from new participating businesses for a total of $30,000. Additionally, the PROCON “sleep” team raised over $12,000, and several members spent the night under the stars including “repeat sleepers” Tom Haubrich, Jeff Roussel, and Jimmy Lehoux.

Waypoint (the private, nonprofit formerly known as Child and Family Services) was established in 1850 and serves as a lifeline to over 1,500 runaway, homeless, and at-risk youth per year throughout the Granite State. As such, they provide a continuum of services from survival aid to independent living support.

Waypoint President and CEO Borja Alvarez de Toledo kicked off the event by welcoming the attendees.

For more than three decades the Stebbins family has championed Waypoint across the state. Mark Stebbins grew up in Manchester, and over 80 years ago, his grandfather Blanchard opened the family business on Lincoln Street. That building was adjacent to the one that houses the current Waypoint Youth Resource Center. History came full circle in 2016 when the Stebbins family donated $200,000 that enabled Waypoint to update the facility into a modern resource hub for their youth programs and services. The family’s legacy continues with Mark and Sally’s daughter Jennifer Stebbins, who is a Waypoint Board of Trustees Member.

Alvarez de Toledo took a few minutes to share what the event means for the city’s at-risk youth. “This will really help me sleep better at night” he said with a smile. “This support allows us to continue to find youth in the streets and under bridges and be able to provide them with services to have a better life.”

After recalling his 2018 experience ‘on the ground,’ Governor Sununu confessed, “One thing I found out last year is that there is very little sleeping. You are thinking about the cold, and the noise, etc. and that is what these youth have to deal with on a daily basis.” He finished by encouraging supporters to not only sleep out next year, but also invite their friends to be a part of the event.

Youth homelessness is a nationwide issue. Nationally, studies have shown that 1 in 30 adolescent minors ages 13 to 17 endures some form of homelessness in a year. These types of statistics inspire the agency to work tirelessly raising funds and awareness for at-risk youth. Program Director Erin Kelly commented “As soon as the SleepOut ends, we start the whole process over again for the following year. We do this by building community relationships, introducing the program to new participants, and getting the community engaged in supporting homeless and at-risk youth.”