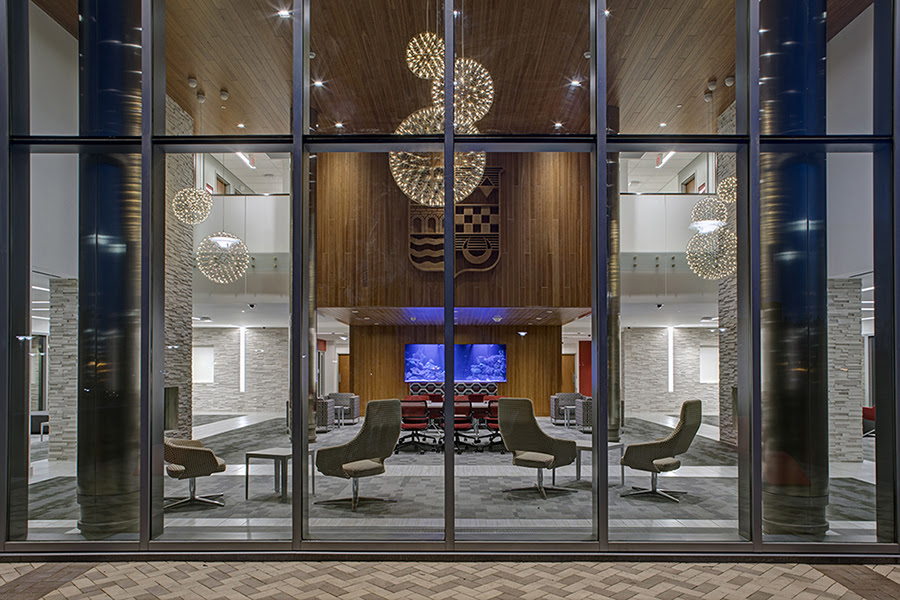 Fairfield, CT – The S/L/A/M Collaborative (SLAM) has completed the transformation of Pierre Toussaint Hall (formerly Bennett Hall), a 69,000sf, $21.6 million residential complex at Sacred Heart University. The five-story building, one of the last structures of this height in Fairfield, is the university’s newest undergraduate dormitory located on the school’s upper quadrangle of the main campus, creating the first component of a residential village that will provide additional on-campus housing.

Pierre Toussaint Hall, part of a former skilled-nursing facility for the elderly, has been transformed into a contemporary, residential life complex of two- and four-bedroom student suites, as well as an apartment for the resident director. SLAM’s design approach required the demolition of one-story elderly apartments that surrounded the facility and replacement of the dense building exterior with transparency and an enlivened energy reflective of today’s college students. A living room addition heals this void of the demolition with views of the lovely quadrangle.

The large, elegant living room is both modern and warm. Designed with a sleek, modern aesthetic with a retro feel, it fronts onto a newly formed quadrangle outdoor space to be further defined by future residential halls. Two grand full-height stone chimneys flank the entryway, drawing you straight back to the monumental salt-water aquarium. The overall space is complemented by unique lighting that includes large-scale globe pendants and recessed lighting in the ceiling and along the walls. A warm wood ceiling and wall treatment extends through the front glass, connecting the exterior patio and views of the quadrangle to the interior living room.

The hall houses 171 beds with a mix of single and quad room units. The quads share a bathroom and large closet, and the singles enjoy their own bathrooms. An arcade-style game room for pool, Ping-Pong, air hockey, darts, gaming console, and table games is also located on the first floor. Study rooms/meeting spaces for small groups or individuals are located throughout the upper floors.

Thoughtful design was used to open up existing floor area and create two-story common rooms that link floors two and three, and floors four and five together by a beautiful open stair, encouraging student interaction within the building. These spaces are furnished with soft seating and digital monitors, creating an open social space outside of the student suites for forging personal friendships or simply relaxing with views of the outdoors.

The Pierre Toussaint Hall is part of a planned development project, with this building marking the first phase of a six-building residential complex master plan led by SLAM.

Says Kevin Herrick, AIA, principal-in-charge, “Studies now show, more than any other factor, one’s judgement of a successful University experience is directly tied to one’s ability to create meaningful personal relationships. Toussaint Hall has been designed specifically with that in mind. It’s finding the right balance between encouraging meeting, collaborating and personal space.