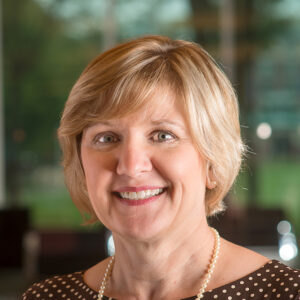 Based in the firm’s Glastonbury office, she joined SLAM in 1994, and has developed an expertise in the public education and corporate sectors.

In her role as project manager, she guides architects, consultants and contractors through the comprehensive programming, design, documentation and construction of projects. As an architect with a strong interest and understanding of all facets of the AEC industry, she is also the first woman member on the SLAM Construction Services board of directors.

Ellithorpe has worked on more than 300 projects at SLAM and has managed nearly 150 of them.

A member of the Professional Women in Construction, Connecticut Chapter, Ellithorpe recently received the 2020 Woman of Achievement Award.

“We admire Cathie’s inclusive leadership style and believe that strength has taken our firm further, faster,” says SLAM principal, Donald J. Crowe Jr., AIA.  “Clients have come to know that they will have a rewarding experience with her at the helm.  The ability to forge lasting and positive relationships with owners, consultants and key stakeholders is her secret to success.”

Her civic work includes serving as an appointed board member of the Suffield Permanent Building Commission (PBC) since 2010. In her role on the PBC, she shares her professional experience to influence civic design and sound fiscal management of the town’s resources.