Held Oct. 22 at the State Room at 60 State St., the awards honor the outstanding achievements in historic preservation and compatible new construction in Boston, and celebrate their positive impact on Boston’s built environment. The event also celebrated the 40th anniversary of the alliance, and the 10th anniversary of the BPA’s Young Advisors, and was attended by approximately 300 preservationists, keepers of historic properties, real estate professionals, architects, engineers, contractors, and developers.

Greg Galer, executive director of the Boston Preservation Alliance, thanked the membership for their dedication and “understating that preservation is an active process — not one of ignoring historic buildings and parks and assuming they will survive for future generations — but actively advocating for their protection, upkeep, and use,” he told the gathering.

Chris Cook, chief of environment, energy, and open space for the city of Boston, praised the alliance for its continued dedication to the work of preserving Boston’s history. “I think what the alliance does best is to bring together diverse voices around preservation issues and really strengthens the argument, bolsters our energy to make sure that we’re protecting these places,” said Cook, who also emphasized the significance of the Preservation Awards. “It’s not enough to just save the places that we care about, we have to celebrate our victories . . . and these awards give us the time to pause together to really celebrate those victories, those milestones, and that’s important because it reenergizes us — not only for the next collaboration but also potentially for the next fight.”

Roger Takeff, chairman and CEO of Renaissance Properties and the chair of the 2018 awards selection committee, presented the awards to the multifaceted development teams responsible for the six projects. Takeff narrated a slide show presentation for each project, detailing how the restoration and construction of each came about. Below are the 2018 winners of the Boston Preservation Alliance Awards. 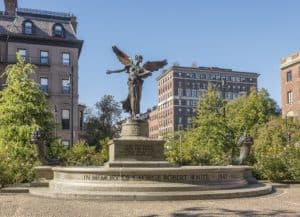 George Robert White Memorial Fountain. The fountain, titled, “Casting Bread Upon the Waters” but more commonly known as “The Angel,” had fallen into disrepair and was shut down for nearly 40 years. Thanks to efforts by the Friends of The Public Garden, in partnership with Boston’s Parks and Recreation Department and the Museum of Fine Arts, the fountain is fully functional and has been restored to its original grandeur. 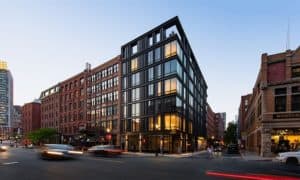 10 Farnsworth. Once an empty corner lot in Boston’s landmark district Fort Point neighborhood, this new building was designed and constructed to fit within the context of the historic architecture while meeting the guidelines of the historic district. The new building embraces the scale and rhythm of the historic streetscape, and the muted, industrial color palate allows the building to blend in seamlessly to the warehouse neighborhood. 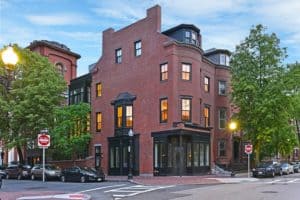 316 Shawmut Ave. This 1860s Greek Revival, corner, bow-front, brick townhouse, is located in The South End. The façade of this historic row house was meticulously restored, and a new contemporary structure was added to the rear of the townhouse. The development team brought back the active, historic, corner storefront, which is now home to an upscale butcher shop.

Feldman Headquarters. The distinctive brick, pre-Civil War manufacturing building was constructed in 1856 and housed a succession of light industrial businesses. After an extensive renovation, the large masonry structure is now headquarters to the Feldman Companies, as well as the Backlash Beer Co., an edgy, industrial looking brew-pub.

Jamaica Plain Branch of the Boston Public Library. This neighborhood library was constructed in 1909, but when the time came for upgrades to the historic building, it was determined that the building needed a “distinctive civic presence.” This was accomplished with a translucent new addition, which incorporates a new entrance and reading room, transforming a small, historic library into a vibrant central node for the community.

Ohabei Shalom Cemetery Chapel. The Jewish Cemetery Association of Massachusetts (JCAM), inspired by the research of students at the Boston Architectural College, decided to save and rehabilitate the dilapidated 1903 chapel building. Work is underway, and when completed, the chapel will house a permanent exhibit chronicling the immigration history of Greater Boston and will provide space for a variety of programs. 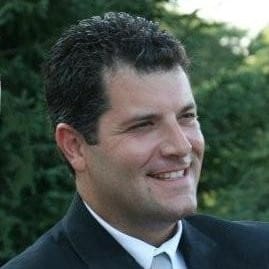 Joe Zaino is an estimator for Universal Window and Door.