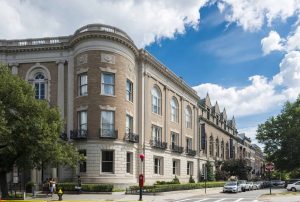 Boston – Shawmut Design and Construction has completed renovations to the Massachusetts Historical Society (MHS), located at 1154 Boylston Street. The updates maintained the integrity of the historical elements as a National Historic Landmark building.

Under the direction of Carl Jay, Shawmut’s director of historic preservation, the team restored the limestone balustrades and renovated the exterior of the 1898 building. To replace the balustrades and parapets, the team removed the roof underneath and repaired steel structural supports. Shawmut also installed elaborate scrim on the scaffolding during construction and made updates to the façade.

“We have been the general contractor of choice for MHS since 2000 because of our ability to preserve and restore its original, historical components,” said Jay. “We also have the ability to work in the tight, urban space without disrupting the society’s day-to-day operations.”

The MHS houses some of America’s greatest historical treasures, including Paul Revere’s handwritten account of his famous ride, Elbridge Gerry’s annotated copy of the Constitution, and Thomas Jefferson’s and John Adams’ manuscript copies of the Declaration of Independence. All documents and historical artifacts remained in the building while Shawmut completed the restoration, which required considerable care and structural preservation expertise

This project represents the latest in Shawmut’s historic preservation work, which includes work on the Mary Baker Eddy House and the African Meeting House.