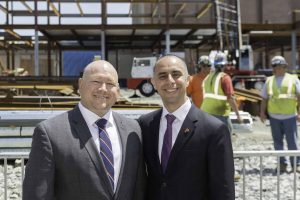 Ron Simoneau, VP of Shawmut Design; and Providence Mayor Jorge Elorza during the topping off ceremony 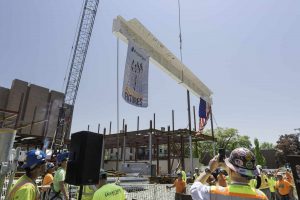 A beam signed by hundreds of members of the Brown University community is raised into place.

Providence, RI – Led by school president Christina Paxson, members of the Brown University community joined together with the Shawmut Design and Construction project team and Providence Mayor Jorge Elorza for a topping-off ceremony held in May. A beam signed by members of the Brown community was placed on the new 80,000sf School of Engineering research building located at 345 Brook Street in Providence.

Designed by Philadelphia-based architecture firm KieranTimerlake, the $88 million project broke ground in November of 2015, and is scheduled for completion in early 2018.

The building will include specialized facilities for nanoscale and biomedical engineering, along with two full floors of new lab space designed to foster collaborative and cross-disciplinary research. The project will also create a new green space that will connect to the existing network of open spaces and tie the various engineering buildings together.

The project utilizes a full Integrated Project Delivery method, the first of its kind at Brown, and the first for a university lab in the nation. “It will create a culture of collaboration and innovation,” said Larry Larson, dean of engineering. “It’s a model for the nation in the years ahead.”

The project will also adhere to the Brown University facility design and construction standards and will target at minimum LEED Gold certification with an energy and performance goal of 25% better than the minimum efficiency and performance criteria established in the Rhode Island-adopted International Energy Conservation Code.

“This building will house the brightest engineering minds in the world,” Mayor Elorza said to the crowd gathered at the ceremony. “It will also add high-paying construction jobs to our city. And I want to personally thank those who worked long and tirelessly to make this happen.”

“We are thrilled to reach another major milestone with a great partner, Brown University,” said Ron Simoneau, Vice President of Shawmut Design and Construction. “We are proud to team up with Brown on a building that will surely transform the university into a research facility of the future.”

Shawmut has completed over 70 projects on the campus including: John Hay Library; Katherine Moran Coleman Aquatics Center and the Nelson Fitness Center; Stephen Robert Campus Center; Perry and Marty Granoff Center for the Creative Arts, and most recently the new Applied Mathematics building.