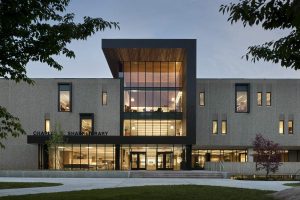 New London, CT – Connecticut College students and staff members have expressed admiration for the Charles E. Shain Library. Now its construction team has been officially recognized with an award from the Associated Builders and Contractors, Inc. (ABC) — Connecticut Chapter.

Staff members from KBE Building Corporation, construction manager at risk for the renovation, received the 2016 Excellence in Construction Award (Institutional) at the Chapter’s 14th Annual Excellence in Construction awards ceremony, held at Aquaturf in Southington in January. KBE also received the “Best of the Best” General Contractor Safety Award, the most prominent safety award in the state, and the Spirit Award at the ceremony.

The Shain Library project comprised 41,000sf of renovations to the existing three-story library, plus 4,600sf of additions, including a new three-story entrance with clerestory, enlarged windows, and mechanical and electrical upgrades.

The renovation was carefully planned and executed with zero injuries, zero claims — and delivery three months ahead of schedule.