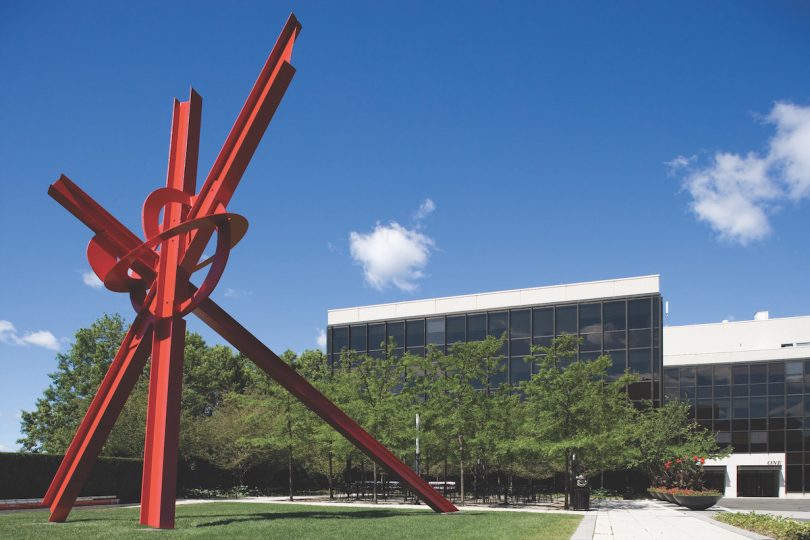 Stamford, CT – Twenty years ago, The Ashforth Company purchased and installed “Borealis,” a 29-foot welded-steel sculpture by Mark di Suvero, an internationally renowned sculptor known for his seminal use of steel and cranes in sculpting.

Borealis is a massive sculpture made of steel I-beams in a tripod shape, painted in an eye-catching red. A crane was brought in to hoist and place the sculpture on permanent exhibit at Greenwich Plaza between the two buildings. Travelers on both I-95 and the Metro-North Railroad can see the sculpture as they pass the office complex. 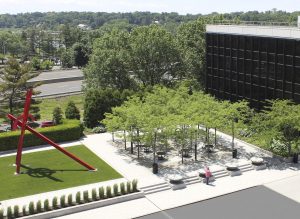 Created by di Suvero in 1988, Borealis is the companion piece of another di Suvero sculpture entitled “Aurora,” which is at the National Gallery of Art in Washington D.C. Borealis has previously been exhibited in the 1995 Venice Biennale in Venice, Italy and at a 1998 exhibition organized by the Orange County Museum of Art in Orange County, Calif.

After 70 years, the 87- year-old artist continues to work in his New York studio that occupies a complex of warehouses on an isolated stretch of the East River in Astoria, Queens.

Mark di Suvero’s architectural-scale sculptures – many with moving elements that invite viewer participation – have been exhibited in the United States, France, the Netherlands, Italy, Spain, Germany, Australia, Japan and the United Kingdom. His work is in over 100 museums and public collections including the Hirshhorn Museum and Sculpture Garden, Metropolitan Museum of Art, the Museum of Modern Art, National Gallery of Art, the Whitney Museum of American Art, the Walker Art Center, and Storm King Art Center.