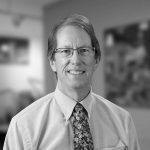 How do you decide when it’s time for the building you have been nursing along for decades to undergo more than just another cosmetic renovation and apply “tough love” to reinvent it?

Our architectural and interiors firm, PCA, faces this question whenever we renovate academic and student life buildings on campuses. Once the vision is cast for what a building can become, the process begins of placing value to what exists in the building. Architecturally, if the “bones” of the building are sound, and there are features that enhance the renovation outcome, those qualities are integrated with the new.

One university hired us to gut a dining hall kitchen and some servery stations with a budget of $6 million. Once the project began, the administration decided that they wanted to spend as little money as possible, and directed the team to maintain as much of the existing systems as feasible. Much time was spent documenting and designing around existing infrastructure. A complicated set of construction documents produced a reduced scope project for $5.5 million.

Wheaton College faced similar decisions with kitchen, servery, and dining spaces at its two dining halls. Chase Hall, built in 1957, didn’t function as a unified space and had a severely aging infrastructure. Emerson Hall, built in 1908, offered historic character, but was operating with significant functional deficiencies.

For Chase Hall, the choice was to gut the entire kitchen and servery. Although the college initially wanted to keep parts of the main kitchen, PCA convinced Wheaton that building a compact kitchen would save money and allow for more flexibility in relocating the program. Wheaton’s strength was the decision to gut the building rather than try to work around a failing infrastructure. By clearing house, PCA was able to reconnect the separated dining areas to create a unified Chase Hall. Bids came in below expectations, and in the end, the school will have a “new building.” Cost: less than $5.5 million.

At Emerson Hall, the goal was to improve the function and program offerings while amplifying the existing character. The kitchen was determined to be adequate for the future program. Renewing the servery to match the character of the dining area and providing proper restrooms will allow for increased flexibility. Emerson will become a hangout for students and also be available for campus events, conferences, and rentals.

When building systems are evaluated, what criteria can be used to determine what remains, what is altered, or what is replaced?