Boston – Samuel Adams announced the grand opening of its newest innovation taproom, blending old and new with a modern brewhouse and rooftop patio situated in the heart of Boston’s Faneuil Hall.

Gilbane Building Company was the CM-at-risk for the project. Mike O’Brien, vice president of Gilbane, commented, “We are honored to have worked with The Boston 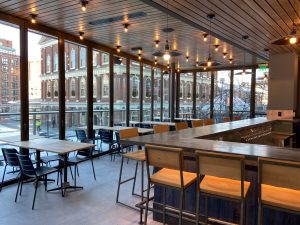 Beer Company on this great new addition to Boston’s hospitality scene. This extensive undertaking was a major accomplishment for our interiors group. Their expertise working with the city and executing this complex scope is a tribute to this team’s commitment and experience.”

The Samuel Adams Boston Tap Room is situated steps from its namesake’s statue and along the Freedom Trail symbolized in the Samuel Adams Brick Red beer. The 14,000sf space includes three expansive bars across three floors and a rooftop patio.

Serving as a home for experimental brews, the 4.25 barrel, state-of-the-art BrauKon brewhouse from Germany has a 1,100 barrel brewing capacity with 12 serving tanks to fuel 20 taps, the majority of which will be taproom-exclusive offerings.

Megan Parisi serves as the Samuel Adams Boston Tap Room head brewer, developing distinctive recipes and experiences like the Innovation Brew Table where drinkers can taste alongside a brewer and share feedback.

After years of imagining a downtown Boston taproom, Samuel Adams first began making a dream a reality in 2017, completely reimagining the former Hillstone Restaurant space with the help of Bergmeyer and Gilbane Building Company.

This landmark project demanded incredible coordination, care and attention to detail throughout to ensure the 15 million annual visitors to this historic district would be both minimally impacted by construction and welcoming of this new space.

The taproom will feature daily sandwich specials and an all-day, everyday bar menu including light bites and sweet treats from area favorites like Boston Pretzel and Brewing The American Dream entrepreneurs Delectable Delights and Top Shelf Cookies. Drinkers can continue the Sam Adams experience at home with crowlers of beers on tap and specialty 4-packs.

Brian Perlow, Bergmeyer assistant principal on the design, says, “The tap room offers several distinct experiences which should encourage patrons to come back again and again to try something different than their last visit. You can sit along the front edge with views of the Sam Adams statue and Faneuil Hall, or in the beer hall at large community tables, or in the open air of the roof deck. Every space is designed with a brand-inspired palette and visibility to the brewing process surrounding you.”