Weymouth Mayor Robert Hedlund cuts the ceremonial ribbon to mark the opening of the new school. 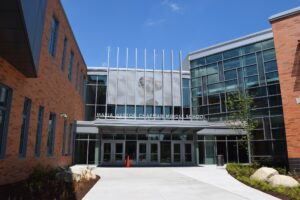 The $163 million project, commissioned by the Town of Weymouth, was constructed by BOND Building. Designed by HMFH, the Chapman Middle School features three academic wings and a variety of lab and makerspaces which are built around the school’s new “Town Square,” a central circulation space and gathering area that also functions as the dining facility. It features an 840-seat professional performance theatre space that will be utilized by students as well as the broader community.

“Hearing the pride and the way that people spoke about Chapman, we took as part of our mission to design the new Chapman with that level of love, care and enthusiasm so that great learning can happen here, and so that one day it can serve as a symbol of this community,” said Matt LaRue, project designer at HMFH.

“Our team is honored to have worked on such an innovative building and one so vital to the community of Weymouth,” said Frank Hayes, president of BOND Building Construction. “Over many months of collaboration, planning, and hard work, we’ve been able to deliver an institution that will help foster a meaningful learning environment and create the best possible experience for all students who walk through its doors.”