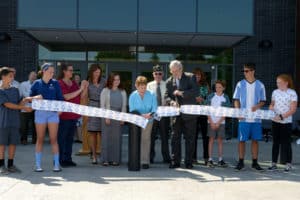 Colchester, CT – A ceremonial ribbon cutting was held at the William J. Johnston Middle School on August 24 to celebrate the opening of the school’s new administrative and classroom wing.

O&G Industries, the construction manager for the project, was responsible for overseeing the construction of the 70,000sf addition that includes the new main entrance, administrative offices, cafeteria, media center, multipurpose room/black box theater, and over 20 classrooms.

Site improvements related to the addition include a new courtyard and patio with expanded parking and redesigned bus and pick up loops that will optimize traffic flow.

Phase 2 of the project includes a 29,000sf renovation of the school’s west wing that includes a gym, kitchen, cafe, and choral and band rooms.

The project will be fully completed in the winter of 2019.