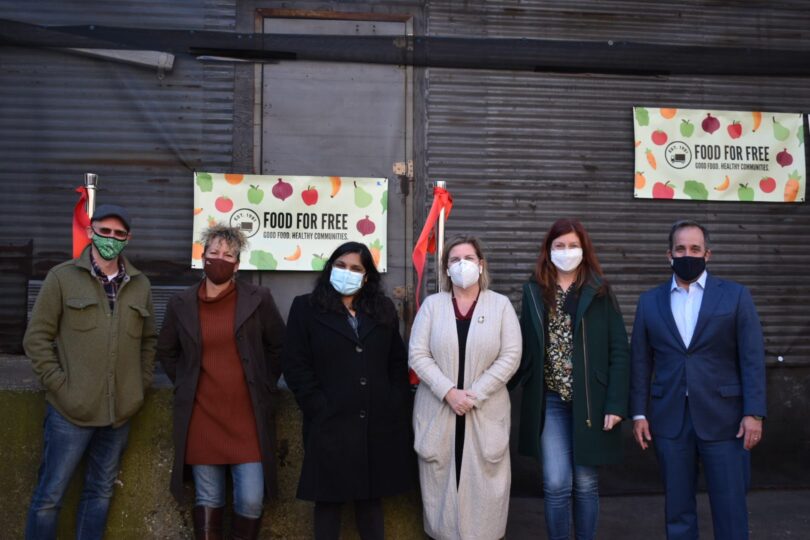 Cambridge, MA – Urban Spaces, the Cambridge-based real estate development company, and Food for Free, a Cambridge-based nonprofit dedicated to providing the Greater Boston community with reliable access to fresh and nutritious food, had a ribbon-cutting ceremony to celebrate the opening of a new food packing and distribution center.

Located at 73 First Street across from the CambridgeSide shopping center, the facility will help Food For Free meet the growing demand for food during the pandemic. Urban Spaces is donating the rent and property management services for the 3,600sf facility.

Since the pandemic hit in March, Food For Free had been using the Cambridge Senior Center as a food packing and distribution center. The nonprofit knew that they would need to find another space once winter began in order to make way for the city’s seasonal warming center for the homeless. To assist, the East Cambridge Business Association’s executive director, Jason Alves, reached out to his membership to see if anyone could help. Paul Ognibene, CEO of Cambridge-based Urban Spaces, quickly responded. Ognibene and his team met with Food For Free, and after just a few short meetings, had forged a new partnership, which provides Food For Free with a new rent-free facility.

During the ceremony, Sasha Purpura, executive director of Food For Free, told the crowd, which included city of Cambridge Mayor Siddiqui, Vice Mayor Alanna Mallon, Councilors Tim Toomey and Marc McGovern, and State Representative Marjorie Decker as well as team members from Food For Free and Urban Spaces, that the relative increase in food insecurity in Massachusetts is higher than anywhere else in the nation. According to a recent report by the Greater Boston Food Bank, one in eight Eastern Massachusetts residents are now food insecure, including one in six children. In response, Food For Free has distributed grocery bags to upwards of 2,000 Cambridge households every week since March, according to Purpura.

Anyone interested in donating, volunteering, or becoming a corporate partner can visit https://foodforfree.org/.