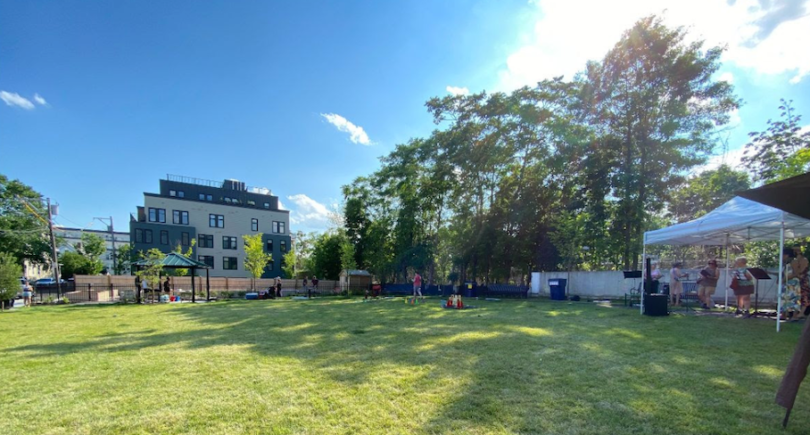 The park was funded as part of the community benefits from a nearby BPDA-approved project at 3521-3529 Washington Street, the Flanagan and Seaton Development Project by SSG Development and Construction. The opening of this new green space marks the completion of ten years of work and effort to bring the Flanagan and Seaton Development Project site back to life, after it was once considered to be one of the most contaminated sites in Jamaica Plain. Significant environmental remediation was necessary to reduce the contamination within the soil at the site, which was due to past industrial use.

“I am happy to finally see this project come to fruition and provide a community green space for Jamaica Plain’s Burnett Street neighborhood,” said BPDA director, Brian Golden. “To transform an area that had been blighted by contaminants, through development that includes both affordable housing and community space, is a win for this neighborhood and its residents.”

The project includes 11,600sf of park space and 2,800sf of garden space. Within that space are 28 raised garden beds, four of which are ADA accessible. Community benefits also included a community room in the self-storage building, and the funding of multiple neighborhood murals. The community garden is maintained by Burnett Street Garden and Park, Inc.

Burnett Street Garden and Park, Inc. is the newly formed 501(c)3 that manages the garden and park, a subcommittee of the Stonybrook Neighborhood Association.

“The 15,000 square foot park, which includes a community garden and a passive park, is an active living asset to the neighborhood and city community,” said David Williams, director of development at SSG.

“We are proud of the lasting transformation of this block, which came out of a healthy process with the neighborhood groups, BPDA, and city officials,” said Dave Fulton, CEO, at SSG.