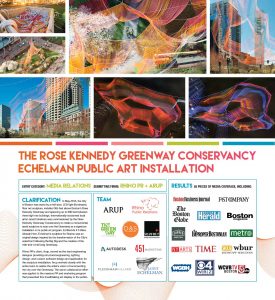 Cambridge, MA – Rhino Public Relations, a specialty public relations and marketing agency, and Arup, a design and consulting firm for the built environment, announced that the media relations campaign for the Echelman art sculpture installed over the Rose Kennedy Greenway last year has received a first place award from the Boston chapter of the Society for Marketing Professional Services (SMPS Boston).

Arup worked closely with Studio Echelman, Autodesk, Shawmut Design & Construction, and the Rose Kennedy Greenway Conservancy to realize the artist’s vision of reconnecting the city over the Greenway.

Rhino PR and Arup accepted the award at the annual marketing communications awards gala on June 9 at the State Room in Boston.

In May 2015, the City of Boston was awed by a half-acre, LED-light illuminated, fiber net sculpture, installed 365 feet above Boston’s Rose Kennedy Greenway and spanning up to 600 feet between three high-rise buildings. Internationally-acclaimed local artist Janet Echelman was commissioned by the Rose Kennedy Greenway Conservancy to create a monumental, aerial sculpture to soar over the Greenway as a signature installation in its public art program. Entitled As If It Were Already Here, Echelman’s sculpture for Boston was an original design inspired by the transformation of the City’s waterfront following the Big Dig and the creation of the mile-and-a-half long Greenway. To bring Echelman’s sculpture to Boston, the Conservancy assembled and managed a multi-disciplinary project team and coordinated installation logistics with the City of Boston.

Rhino PR’s client Arup served as the lead engineering designer providing structural engineering, lighting design, and custom software design and application for the sculpture installation.  The  collaborative effort was applied to the massive PR and marketing program that presented this breathtaking art display to the public.

The close coordination of this marketing campaign is most notable for the fact that it was launched by five different entities coming together for a six-month project with an installation launch date. In addition to in-house marketing staff at the five companies involved in the design, construction and installation of the net sculpture, the PR and marketing team included D&S PR|Communications for the Rose Kennedy Greenway Conservancy; 451 Marketing for Shawmut Design & Construction; FleishmanHillard for Autodesk, and Rhino PR for Arup.