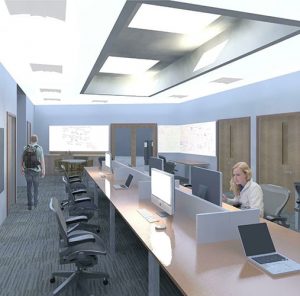 For more than a decade, a dark, trapezoidal shaped basement lab at WPI’s Gateway campus sat as an undersized shell. Originally designed as an NMR lab, the basement extended outside the footprint of the building and had removable roof panels to allow large equipment to be installed at a later date. This potential was never realized, and the faculty and administration struggled with finding an appropriate use for their unusual asset which was seeming more and more like a liability. In order to find a solution, WPI engaged the design-build team of Consigli and LAB / Life. Science. Architecture, Inc. to work with the faculty and develop a new solution. 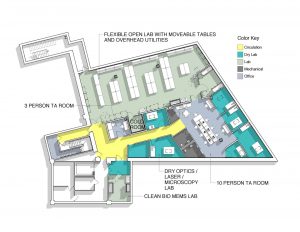 When programming and design began, it became clear that the unusual geometry of the footprint created inefficient circulation systems with odd hallways and short spurs to doorways. In order to free up the thinking, we created a blank plan, leaving only the permanent features, including columns, an existing toilet room core, and the below-slab piping. For waterproofing reasons, we were required to reuse all the piping lines in order to avoid penetrating the basement slab. With only those constraints in front of us, it became possible to see new possibilities for efficient lab layouts.

The program called for a large shared wet biology lab, a shared student office for a dozen students, and numerous small dry labs. By strategically placing the open lab and the open office, it became possible to eliminate hallways and to use the aisles within the open spaces to access doorways and egress points. The more-efficient plan allowed WPI to house three additional faculty labs in the space — nearly doubling their original expectations.

But creating efficient space was not the only obstacle that needed to be overcome. The space was still dark and damp, with no natural day light. As part of the renovation, we were able to locate four new skylights above the open lab and the open office, without affecting the existing structural framing. The new skylights transformed the feeling of the space, and it is now an enticing place to work. Additionally, Consigli employed an epoxy-based waterproofing system to seal the cracks and joints in the concrete walls that were substantially below the water table. These two improvements made the project not only viable, but highly successful.

The project opened last fall and, with its capacity to house a significant amount of new research space, has enabled the departments to recruit new faculty and reorganize existing space with improved adjacencies and efficiency. Revitalizing underutilized space is a great strategy for unlocking constraints in an academic setting. 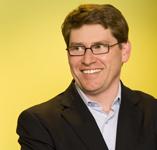