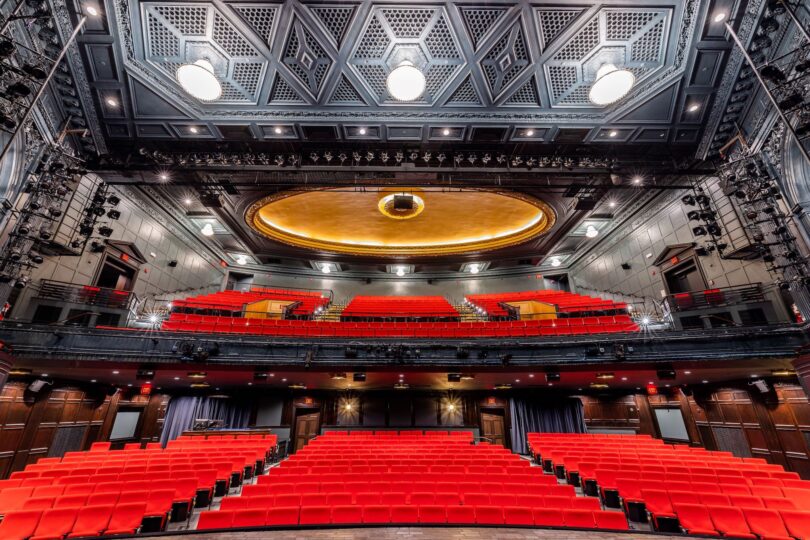 Boston – Shawmut Design and Construction and The Huntington announced the reopening of The Huntington Theatre following its transformational renovation to restore, renovate, and modernize the almost 100-year-old landmark.

In partnership with Bruner/Cott Architects and Leggat McCall Properties, the $58 million preservation, restoration, and revitalization to the historic building, originally built in 1925 as the first not-for-profit playhouse in the U.S., included the renewal of the theatre building and the complete renovation of the adjoining service building which houses dressing rooms, a rehearsal room, and event space (now named the Maso Studio), new and additional all-gender restrooms, a new elevator that serves all floors, and a new accessible-to-all entrance.

The theatre was meticulously restored with new seating, improved sightlines, and new acoustic systems to ensure a high quality and comfortable audience experience. The theatre wood work was painted a dark, rich Narragansett Green while the dome was painted gold, reflective of the original 1925 design. A new entrance features a universal, accessible design with a vaulted arcade ceiling as homage to the original building, with decorative capitals repurposed from the building’s original columns. On the second floor, the Maso Studio’s original ballroom millwork was refurbished and the windows that were long bricked and boarded up while the space was a black box theatre have been revealed to let in natural light. 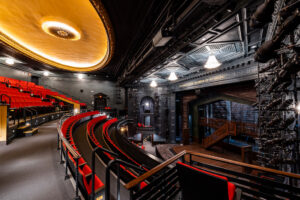 The theatre features 739 new seats that include more legroom and greater width, with the configuration updated to accommodate an accessible orchestra pit with a ramp entrance, an automated sound booth that can accommodate various needs, and additional accessible seating throughout the theatre. A new, fully automated, and programmable fly-rigging system replaced the antiquated manual counterweight system for flying-in scenery and the curtain, improving both safety and efficiency for staff.

Additional highlights include major upgrades to all systems, including HVAC, sprinkler systems, and electrical, and full upgrades and modernization of all staff, crew, and artist support spaces. Forty-five historic lighting fixtures original to the 1925 building were thoroughly restored throughout the theatre and lobby, including the chandeliers and vintage star fixtures. The project used key elements of sustainable design, moving toward the City of Boston’s goal of carbon neutrality by 2050. Altogether, these substantial improvements to the historic venue will allow The Huntington to expand its services to artists, audiences, staff, and the community at large.

The renovations to The Huntington Theatre complex took approximately 18 months and the theatre reopened to the public on Oct. 10.