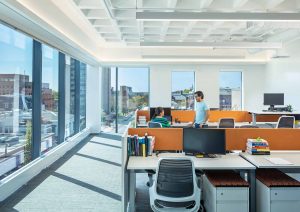 In partnership with Architecture Research Office, the project included a gut renovation of the second, third, and fourth floors, transforming the space into a vibrant multidisciplinary hub. The reimagined building, originally built in 1970, was formerly characterized by its narrow and dark interiors, but is now highlighted by a design that focuses on natural light.

Creating a hub for high-impact research, education and innovation, the renovation improved the interior design and work environment for its occupants, allowing for several centers, institutes, and departments to move into the same building. 164 Angell Street now houses occupants from five entities from across the Brown campus: the Carney Institute for Brain Science, the Center for Computational Molecular Biology, the Data Science Initiative, the Department of Education, and the Annenberg Institute for School Reform. 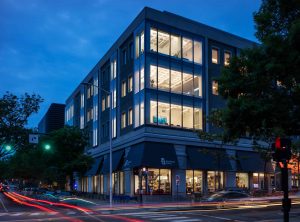 Additionally, the building’s systems and structure were substantially overhauled, including replacement of 40% of the precast façade with curtainwall, new MEPs and elevator systems, and an updated enclosed lobby space off Angell Street.