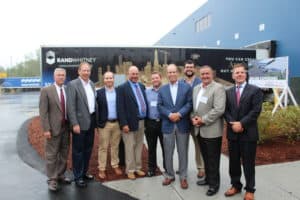 Rand-Whitney is owned by The Kraft Group of Foxborough — owners of the New England Patriots. Manchester.

N.H.-based firm PROCON was the designer and construction manager for the project.

In addition to adding a warehouse to the site, the company upgraded the look of the overall campus. Therefore, after completing the warehouse, the team began work on improvements to the adjacent building that houses graphic design for Rand-Whitney located at 207 Greenwood Street.

The building’s façade received a facelift with renovated windows, LED lighting, and a new exterior paneling system painted in the signature Rand-Whitney Blue.

The headquarters building received a complete makeover with efficient storefront windows and a composite/insulated metal panel combo. Offices, common areas, and conference rooms were also updated along with new stand-up desks for the staff, also finished in the company’s signature color. Lastly, the main lobby was refurbished with modern interior finishes in keeping with the company’s branding.

Overall improvements produced an updated and consistent design across the campus. The increased plant infrastructure will also give them the ability to purchase more capital equipment, maximize their production, and grow their capabilities and offering, which is a win-win for their employees and customers.

The current facility was built in 1965, and according to Nick Smith, “The market has changed substantially in the last 20 years with a mass exodus of a lot of major segments of manufacturing in the Northeast. Today, there are 50 fewer plants than 25 years ago.”

Such changes prompted the family-owned business to expand and renovate to remain competitive in the manufacturing market.

Among the notable attendees was The Kraft Group leadership that included the Founder Chairman and CEO Robert Kraft, as well as Jonathan and Daniel Kraft the President and International Presidents’ respectively. Worcester City Manager Edward M. Augustus, City Councilor George Russell and PROCON’s Chairman and CEO Mark Stebbins also turned out to congratulate the company.

Robert Kraft talked about his deep roots in Worcester going back to the 1960s and his affection for the City over the years.  “We are honored to be able to grow and expand here. This is a function of the people working with us – a great management team and employees. Worcester is very important to us as a vibrant community of people who care and do the right thing. So it’s our honor to be here and thank everyone that has been a part of this.”

It was a complex project requiring the construction team to work around the daily operations of the existing facility. “It was really close quarters that took a lot of work on everybody’s part. I want to thank my PROCON design and construction team who has been down here working shoulder to shoulder with Nick and his team to get it done. I think the people that work here must be incredibly proud to come to work at such an amazing building. It has come into the modern times, and is a much more efficient and productive facility” declared Mark Stebbins.

Rand-Whitney is one of several companies owned by New England Patriots’ Owner Robert Kraft. As such, it is the largest independent corrugated packaging manufacturer in New England with areas of expertise in cost-saving package re-engineering and custom lean manufacturing programs. The company also produces and ships corrugated displays, shipping containers and folding cartons to a variety of industrial and consumer end-users. The Worcester headquarters is their third warehouse collaboration with PROCON, who previously partnered with them on facilities in Dover, NH, and Pawtucket, RI.

The ribbon-cutting celebration concluded with a tour of the facility, an employee group photo and a catered barbeque luncheon for the Rand-Whitney workforce. Edward Augustus summed up the sentiments of the morning saying “We may do a lot of good work in Worcester, but we don’t forget that many great people in this city come to work at manufacturing enterprises like Rand-Whitney, earn a good paycheck, raise their family, pay their taxes and contribute to their community. And these are the kinds of projects that make everything else possible.”

PROCON is a single-source, design and construction management firm serving commercial developers throughout the Northeast. The 83-year-old, 4th generation Company was built on integrity, lasting partnerships, and a steadfast commitment to client success. The Company’s one-stop-shopping approach to design, engineering and construction services means that at PROCON, every solution is just down the hall.