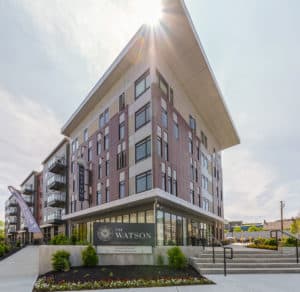 Quincy, MA – WinnCompanies and NeighborWorks Housing Solutions announced the completion of The Watson, a $44 million, 140-unit apartment community that represents the largest number of workforce units ever financed under MassHousing’s Workforce Housing Initiative. 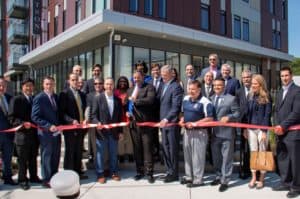 Ribbon-cutting by WinnCompanies CEP Gilbert Winn. To the left of Winn Is U.S. Rep. Stephen Lynch. To the right of Winn is Massachusetts Gov. Charlie Baker.

The Watson features 86 apartments available to rent at 110% of Area Median Income (AMI), a new “middle-income” rental category aimed at individuals and families whose incomes are too high for traditional housing subsidies but too low to afford rising rental housing costs. Twenty percent of the property (28 apartments) are rented at 50% AMI and 20% (26 apartments) are market rate units. All but one of the workforce units are rented.

The project also represents a major urban place-making initiative. It was developed on the site of a long-vacant former office building adjacent to the former Fore River Shipyard, a largely dormant, sprawling ship-building complex facility that stands as one of the city of Quincy’s best opportunities for mixed-use, mixed-income development. 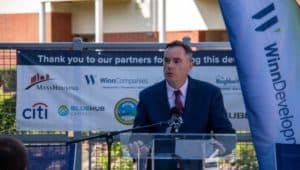 Community leaders believe The Watson will serve as a new anchor that generates more private investment opportunities in an underdeveloped area of the city.