Bedford NH – PROCON, of Manchester, won three Associated Builders and Contractors (ABC NH/VT) Excellence in Construction awards. It was standing room only at the Manchester Country Club in Bedford as A/E/C professionals throughout the region gathered for the annual ceremony. 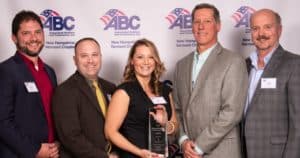 The 83-year-old design-build firm won for three Massachusetts-based projects: Homewood Suites by Hilton in Chelsea, Brightview Senior Living in Wakefield, and Crowe Hall at Merrimack College in No. Andover.

This year, PROCON’s winning projects all majored in the extreme: a very tight site, an immensely condensed schedule, and heavily contaminated soils. 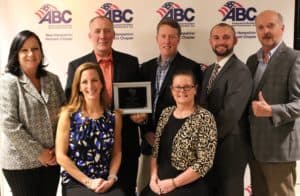 Crowe Hall made Merrimack College history as the first new academic building in 30 years. The initial 12-month timeframe was condensed into nine months. The project team implemented some aggressive preplanning strategies and installation procedures to accelerate the process.

The project won the Merit Award in the Institutional/Public over $10M category.

Homewood Suites by Hilton won the Commercial Over $10M Award of Excellence. At one time, the hotel’s site was considered one of the worst contaminated soils in the nation, and had been vacant for 14 years. In an extensive remediation process, over 4,500 tons of soils were excavated in nine months and transported to places as remote as Michigan.

The annual ABC NH/VT event is one of the premier competitions in the building and construction industry, showcasing and recognizing outstanding construction projects throughout the region. A cross-section panel of industry judges selects the winners in several categories, based on remarkable achievements in leadership, safety, and innovation.

In 2018, ABC NH/VT added a Workplace Development category, and PROCON was awarded the first honor. PROCON consistently strives to provide venues and opportunities for industry development both internally and in the local community.

In-house workforce programs include Lunch and Learns, PROTalks, internships, mentoring and the ClickSafety online training program. The company has also spearheaded initiatives to ensure a next-generation A/E/C workforce by launching the ACE Mentor NH program. ACE pairs mentors with students to learn and develop skills in the A/E/C industry. In addition, the company worked with Parkside Middle School to develop a program that introduces students to the skills needed and career opportunities in construction trades. PROCON’s Director of Talent Acquisition and ACE board member Annette Carroll, accepted the award for workplace development.