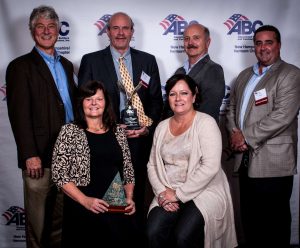 Brightview Assisted Living Community in Arlington, Mass. was awarded the top honor, “Design-Build Excellence” and PROCON’s Architecture/Engineering (A/E) Office Expansion received the “Design-Build Merit” award. Project teams from companies throughout the region gathered at the Capitol Center for the Arts in Concord to recognize the award winners. 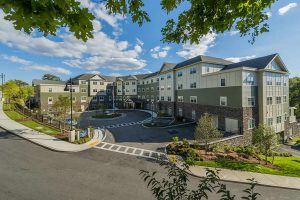 Brightview Assisted Living Community in Arlington originated in 2012 as a rocky ledge filled with trees, dense foliage and a steep boulder-filled slope presenting immense construction challenges. Today, a beautifully appointed 4-story 68,000 SF building overlooking Boston’s skyline, occupies the site with every modern amenity to meet the needs of a rising assisted living population. “It was a challenging job that had a successful ending thanks to our project team. Shelter Development has called it one of their favorite communities because of the building location, color schemes, and layout,” stated Senior Vice President and Project Executive Dan Messier who accepted the award alongside members of the project team. 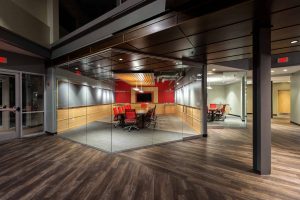 The premier Class A office space now known as PROCON A/E offices began its life in the 1960s as the Gilbert Block Plant. PROCON acquired the building in the 1980s and the warehouse quickly became a storage zone for construction equipment and Associated Builders and Contractors training. As the Company grew exponentially, the need arose for a collaborative workspace to house its 50 plus architects and engineers. The new A/E office expansion has provided a productive and attractive office space showcasing the PROCON design team’s architectural skills and construction management talents. PROCON Executive Vice President of Operations, Lance Bennett, took to the stage with members of the A/E design team and thanked the organization for the award adding, “We were a Company growing fast with architects spread throughout the building. In 2010, we decided enough was enough, and we needed a collaborate space to bring everyone together. We are proud of how it turned out; it’s a wonderful work area where our teams can effectively connect.”

ABC’s panel of judges represented a cross-section of the industry including owners, architects, and planners. Award winners are selected based on several criteria that recognize professionalism, creativity, capabilities, sustainable practice and overall accomplishments in its category.