Bedford, NH – Picturesque Bedford is comfortably situated next to Manchester – New Hampshire’s largest city, and is an easy 50-something miles from Boston. Founded in 1750 the town has a proud history in which Goffe Mills and the Wayfarer Inn have each played relevant roles. But history is giving way to progress this year with the construction of a 40,000sf Whole Foods Market and complex to be located at 121 South River Road. The store will anchor the new Goffe Mill Plaza memorializing the name of the Goffe family that owned the property from 1744 to 1961.

PROCON of Manchester is the design-builder for the mixed-use project, and Jiten Hotel Management (JHM) is the developer.

The proposed complex includes 73 residential units, 8,800sf of retail space and is being built to house a bank, fitness center and retailers, yet to be determined.

When developer JHM initially envisioned the site of the former hotel and conference center as a retail/residential complex it needed an architecture and construction partner that understood the New Hampshire climate. JHM chose the NH based, 80-year old design-build firm, PROCON, for the task. Conceptually, the complex would offer housing, goods, and services, as well as provide jobs to the local community. JHM Vice President, Beth Scherer says, “PROCON is usually our go-to company for hotels, but we wanted to work with them on this particular project because of our great relationship with Mark Stebbins and John Samenfeld, and architects at the firm.

They also understand the New Hampshire climate, and they appreciated the historical value of the Goffe Mill project to the Bedford community.”

The PROCON team immediately saw the value of how incorporating modern naturalistic materials within a traditional framework would promote the community’s future, while respecting its rich heritage.

The last descendant of the Goffe family sold the property to hotel developers – the Dunfey family in 1961. They opened the Sheraton Wayfarer Inn and Conference Center the following year. The hotel complex included the Goffe Mill Bridge connecting the hotel and conference center. The current owners closed the property in 2010, and hired the civil engineering firm of TFMoran to redesign the area for the purpose of mixed-use development.

As the plans took shape the Town of Bedford, JHM, and PROCON committed to retaining as many historic elements of the property as possible for the future enjoyment of local residents and visitors to the area. As such, the mill is to remain intact, receive exterior refurbishments and a new roof. Signage will be prominently placed pointing out its historical significance for residents and guests to enjoy for years to come. Whole Foods has also committed to reclaiming portions of the original mill and bridge materials to be used as part of their new store.

This site is full of rich history, including the former Wayfarer Inn and Conference Center which has played a significant role in New Hampshire’s political history serving as a long-time hub for politicians during New Hampshire Presidential Primaries. Bloomberg columnist, Al Hunt called the Wayfarer “One of the genuine landmarks in the history of American politics.”

News outlets once used the location for extensive elections coverage and nationally televised programming such as “Face the Nation.” Over the years the iconic establishment has hosted political luminaries including Hillary Clinton, George H.W. Bush and Bill Clinton. 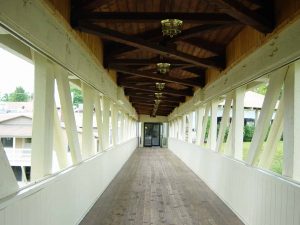 The historic Goffe Mill covered bridge took a different direction when the Town of Wentworth was able to successfully negotiate with JHM, TFMoran and PROCON for its acquisition to install in place of a failing Warren Truss metal bridge.

In March 2015, PROCON, along with the collaborative efforts of several local firms successfully transported the 107 foot long covered bridge to a Wentworth storage facility to be refurbished. NH DOT has put out an RFP to remove the Town’s old Warren Steel Truss bridge built in 1909. All former bridges over the Baker River Falls before 1909 were wooden covered bridges, so Wentworth is thrilled to be able to use a rich piece of local history for its residences and visitors to enjoy for at least 75 more years.  Wentworth has applied for the Northern Borders Grant to receive the much

needed funding to upgrade and install the recently acquired bridge.

The remaining funds are coming in from private sources and the town hopes to see the bridge installed over the Baker River Falls in the summer of 2016.

Massachusetts based JHM and PROCON share their own piece of history together, which began when they teamed on the construction of the Manchester Courtyard by Marriott 18 years ago. It was the start of a lasting business friendship. Both companies collaborated on five subsequent hotels before the Goffe Mill Plaza project.

Their Relationship has the easy camaraderie of partners who are accustomed to working together. Jiten Patel, CEO of JHM commented about this saying, “Mark, John and the team at PROCON have provided exemplary work over the years. They are committed professionals who offer a unique design-build process that drives our product to market faster.”

PROCON Chairman and CEO, Mark Stebbins said, “It has been a great experience working with Jiten Hotel Management All these years. We’ve done several successful projects together, they are a great development team, and we are thrilled to partner with them on this project.”

To date the construction work is on schedule with PROCON expecting to complete the Whole Food’s shell by November, 2015, and the grocery store anticipates opening in spring of 2016.

Overall, Bedford’s community has rallied around the Goffe Mill project with enthusiasm as being beneficial to the town by providing new jobs, a great place for visitors to the area to enjoy, and as a catalyst for economic growth. The entire team is proud to be a part of the revitalization of this historic site.