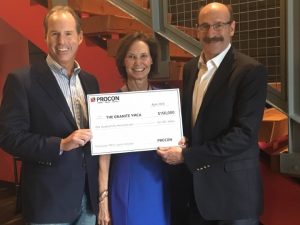 Manchester, NH – The Granite YMCA’s Capital Campaign received a major boost recently, thanks to a considerable donation of $150,000 from PROCON, a local design and construction management firm in the Manchester area.

“Our heartfelt thanks to Mark and Sally Stebbins and PROCON for this amazing gift,” said Hal Jordan, president and CEO of The Granite YMCA. “Their kindness and generosity will have a lasting impact on the lives of youths across our region.”

The PROCON donation was a result of a pledge made to match funds raised by the team’s division of the Y’s Capital Campaign. All funds raised will support building the Y’s Centers for Youth and Teen Leadership. The Allard Center site, a new facility, is expected to open this fall with the renovated and expanded downtown Manchester center slated for a winter 2017 opening. When completed, both centers will serve more than 2,000 teens and tweens.