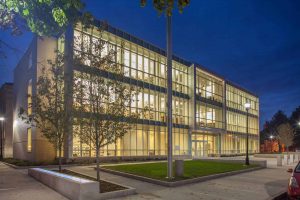 Designed by James Clough as a gift in honor of his daughters, the Holyoke Public Library was built in 1902 and is situated in a historic park. A lack of funds, the passage of time, and faulty drainage made 40% of the interior unusable by the time the library began renovations. The library worked with Finegold Alexander to create a design that preserved the functioning sections of the historic building, selectively demolished an outdated and potentially dangerous stack wing, and added a larger, compatible addition.

The library now has 40,000sf of space in which to provide services to patrons. Many of the historic features were preserved, including interior murals, and the library now meets Americans with Disabilities Act mandates.

The renovation and addition reflect a significant understanding of how a public library functions in today’s society. The new addition and historic renovation of the original library were successfully combined to create a spirited sense of spaces, relegating neither new or old to a subordinate position. The project featured many sustainable design elements and is slated for LEED Gold certification.

The theme for the 2015 Tsongas Award was “And the Award Goes To” that celebrates the culmination of many years of hard work, investment, vision and collaboration: the completed and restored building.

The project team, including members of Finegold Alexander Architect, the City of Holyoke, and the Library, received the Award at Preservation Massachusetts’ annual Paul E. Tsongas Awards Dinner at the Fairmont Copley Plaza in Boston on May 6, 2015. This annual event recognizes and celebrates the efforts and accomplishments of those individuals and organizations that have made significant contributions to preserving the Commonwealth’s historic resources