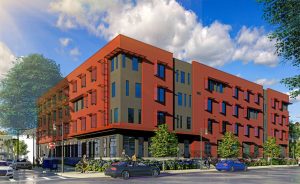 Boston – At one of the nation’s oldest federal public housing developments, a new apartment community for low-income seniors will offer some of the most comfortable and efficient rental homes available anywhere, thanks to the innovative methods of Passive House construction.

Designed by The Architectural Team (TAT) for Beacon Communities Development, the new, 55-unit expansion of Old Colony in South Boston is part of a decade-long redevelopment of The Anne M. Lynch Homes at Old Colony, as the affordable housing complex is known. According to the architects, the work also reflects an emerging national wave of affordable multifamily housing built to stringent, energy-saving standards – Passive House – which is better known for its use in high-end, single-family homes.

For phase 3C of Old Colony, TAT and Beacon Communities have conceived the 51,000sf property in association with the Boston Housing Authority, which is leading the revitalization of the entire 400-plus unit community, The Homes at Old Colony. 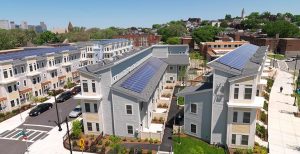 The work will complete a third stage of redevelopment currently underway, with phase 3A bringing 135 affordable apartments across two buildings, and phase 3B comprising 115 units in a single four-story structure.

TAT’s architectural approach for this latest component at the Homes at Old Colony draws on staples of Passive House design including robust, heavily insulated walls and high-performance windows, along with passive solar design and an emphasis on compact, simple geometries to reduce thermal bridges. A highly efficient HVAC split system further ensures a healthy and comfortable indoor environment for tenants by reducing contaminants such as mold. The project’s roof-mounted photovoltaic (PV) array generates power to cut carbon emissions and boost sustainability and resiliency, too.
Other comfort- and performance-enhancing features at Old Colony do double-duty as engaging elements of the exterior design: Thermally broken metal fins act as solar shades bracketing many of the building’s window openings, for example, reducing solar heat gain while also adding dynamic visual interest to the façade.
Old Colony Phase 3C is expected to begin construction in summer 2020, with completion anticipated in 2022. Phases 3A and 3B are set to complete in 2021 and 2022, respectively.