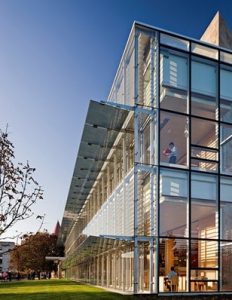 Exterior shading, when used correctly, can be extremely effective in optimizing the use of natural daylight, mitigating potential heat gain, and increasing occupant comfort. The usefulness of exterior shading depends on several factors, such as building size and orientation, function, location, and site conditions. Even in conditions that appeal to occupants’ comfort at points during the year, it is important to understand how energy is used to condition the thermal load brought in through glazing, and how at times it can cause more energy to be used to operate the building.

The Cambridge Public Library, in Cambridge, Mass., combines several innovative forms of exterior shading to maximize effectiveness. The library, designed by William Rawn Associates and Ann Beha Architects, and MEP-FP services performed by Vanderweil Engineers, utilizes the first double-skin curtainwall façade in the United States. Popular in Europe, the double-skin façade is made up of an interior and exterior fully glazed curtainwall, three feet apart, and two stories high.

The thermal flue between the two glazing layers captures the heat gain from the sun and prevents it from entering the building. In the summer, this heat is exhausted from the building, and in the winter, the heat is trapped and acts as a thermal blanket to help insulate the building. Furthermore, operable windows in the interior façade allow natural ventilation when the outdoor temperature is moderate. Also located between the double-skin curtainwall are one-ft. horizontal louvers which adjust to the sun’s angle and provide glare reduction and shading. On the exterior, laminated glass visors act as additional sunshades, as well as adding architectural features. The building is oriented to face southwest, and all other façades are well insulated with less glazing. South-facing façades benefit most from movable shading to adjust to the sun’s angle in the sky during the different seasons and times of day. As the use of energy is based solely on conditioning the thermal load on the building, exterior shading makes a big difference for the comfort of the occupants.

Internally driven buildings and buildings that need simultaneous heating and cooling are among those for which exterior shading will have little effect beyond glare reduction, and in some cases have a negative impact on energy. For example, Vanderweil Engineers, with the assistance of HOK, performed a feasibility study on an academic lab building in Pennsylvania. Exterior fin length and ceiling heights were evaluated to provide adequate daylight to the core and reduce glare on the perimeter spaces. An energy model analysis was also done to estimate the annual energy cost savings yielded by comparing the project building with and without vertical fins. The building with vertical fins on the northwest façade performed worse than the building without fins, in regards to both annual energy usage and energy cost. This is due in part to the effect of the fins blocking solar radiation, or free heating, in spaces such as laboratories that require a large amount of outside air for ventilation, and require heating after the local equipment has called for cooling.

There are many factors to consider when deciding if exterior shading is worth the investment. If the building is internally driven, with high ventilation requirements and equipment density, or significant occupancy loads, exterior shading would only have the effect of glare reduction, and as in the case above, could hinder the energy performance of the building. For an externally driven building with low equipment density and occupancy, exterior shading could have a positive impact on both thermal and visual comfort while optimizing daylighting. It is also important to note the path of the sun and building rotation so that building azimuth angle and shading façade can be optimized to make the largest impact on energy. If all the factors come together, exterior shading could have a positive effect on both building occupants and energy.

Emma Van Lieshout, LEED AP BD+C, is a mechanical engineer in the Green Integration Group of Vanderweil Engineers in Boston.