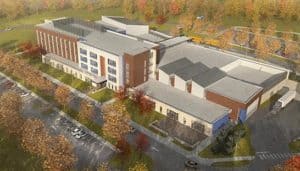 Groton Middle School, aerial view of phase one of three projects / renderings by The S/L/A/M Collaborative

Designed by The S/L/A/M Collaborative  and constructed by O&G Industries, the project is estimated to be completed for occupancy in summer 2020. 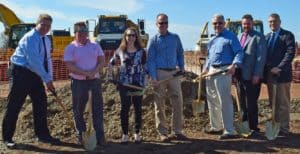 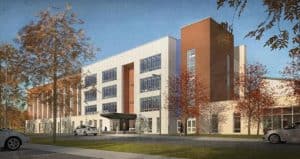 Rendering of Groton Middle School, phase one /The S/L/A/M Collaborative

The new school launches the first of three projects in the Groton 2020 School Improvement Plan that will consolidate the middle school level, permitting the two existing middle schools to be repurposed as elementary schools. Construction of the 155,000sf school on vacant land immediately north of the existing Fitch High School forms a middle/high school campus.

Curriculum for the Groton Middle School will follow the International Baccalaureate Middle Years Program and include STEM and Arts and Humanities Pathways.  Notable features supporting the curriculum are makerspaces, a computer-aided design lab and a black box studio theater.