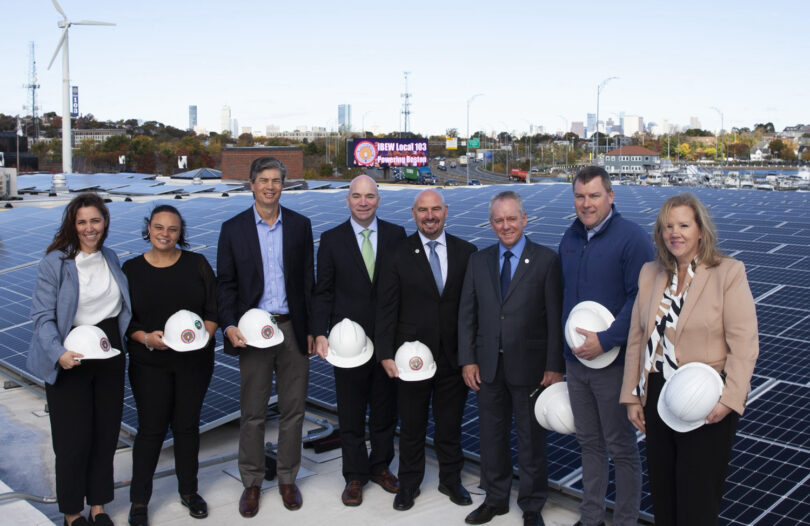 Officials from Nexamp and IBEW Local 103 were joined by local elected officials on the roof to view the completed solar and storage system.

Dorchester, MA – Nexamp and the International Brotherhood of Electrical Workers (IBEW) Local 103 recently celebrated the completion of a solar and energy storage project at IBEW’s headquarters in Dorchester. The project will provide IBEW with annual savings on energy costs and supplemental power in the event of a local power outage. 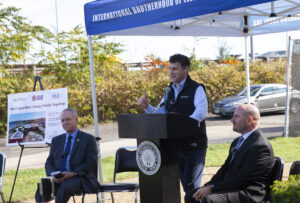 Nexamp is a developer of solar and energy storage solutions nationwide, and this project is one of a growing number in Massachusetts that pair solar energy with energy storage and benefit from state incentives under the Massachusetts SMART program to increase grid resiliency and manage power on the electric grid during times of peak energy use.

IBEW’s combined solar and storage system, designed and installed by Nexamp and Lynnwell Associates, will provide enough energy to meet nearly 70% of the electricity needs of IBEW’s headquarters. Combining the solar generation with energy storage has the added cost saving benefit of enabling IBEW to store solar power when electricity prices are low and use it when prices are high. It can also provide much needed backup power during disruptions caused by increasingly frequent and intense storms.

This project represents an ongoing relationship between Nexamp and IBEW, with Nexamp acting as the long-term operator of this system, working closely with IBEW to ensure optimum efficiency and performance over the life of the project. The system pairs 220 kW DC of solar generation on IBEW’s roof with a ground-mounted, 200 kWh AC-coupled, lithium-ion battery energy storage system (BESS) located behind the meter, providing 265,000 kWh of electricity per year.

Mark Frigo, Nexamp vice president of energy storage, said, “We’ve seen a significant spike in interest in energy storage among commercial customers over the past year as the technology has improved and the benefits are becoming more apparent. The project with IBEW is one of our first behind-the-meter applications and is a great example of how storage is able to address rising energy costs as well as an increased need for resiliency.” 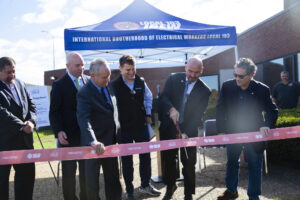 The partnership with Nexamp is one of IBEW’s many efforts to reduce its carbon footprint, reduce energy costs, and increase energy efficiency. This project will complement other upgrades completed by IBEW, including facade-mounted solar panels and a wind turbine that provide power to the group’s training center, wind-powered EV charging stations in the parking lot and solar-powered off-grid LED parking lot lights. All of these projects will provide training opportunities for IBEW members who will be installing the advanced technologies that are at the heart of the clean energy transition.

“Our union is walking the walk when it comes to energy efficiency,” said Renee Dozier, business agent, IBEW Local 103. “The completion of this project comes on the heels of historic support from the Biden administration, through the Inflation Reduction Act and other measures, that means our transition to renewable energy will also uphold and create good union jobs.”