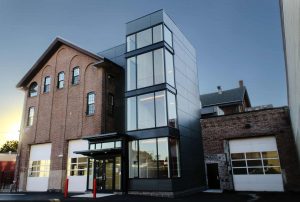 The project called for a complete gut of the existing space, since it would not serve as a 21st century office environment.

Throughout the building, the brick walls and wooden beam structural elements have been left exposed. The second and third floors have been converted into office space that will become the Feldman work areas. The interior layout of the third floor is designed to emphasize the cathedral ceiling on the top floor, as well as the buildings original 19th-century construction.

Blocked for years, original window penetrations on the upper floors have been reopened to bring in natural light to the space. Skylights have been added to the peaked roof, adding even more light to the third floor. Both the brick and the wood beams have been painted white to help reinforce the sense of light. The color also serves as a way to refine the roughness of the original building materials.

All the newly installed HVAC ductwork has been left exposed and is also finished in the same white palette. The basement and the first floor have been finished in a similar manner. Feldman has prepared the lower two levels for a future tenant.

The most prominent change to the exterior of the building is a new addition that contains an elevator and stairs.

The new addition provides a stark stylistic departure from the 1800s architecture. One side is an expanse of windows, while the other three are clad in engineered, factory finished, construction panels. The modern finish gives a nod to the high-tech environment that surveyors like Feldman now occupy.