At the northeast corner of the historic New Haven Green sits the New Haven County Courthouse. Designed by Allen and Williams, this 1914 Beaux Arts masterwork was added to the National Register of Historic Places in 2003. By the turn of the century, the effects of pollution, sporadic maintenance, occupant-driven alterations, and the passage of time left this graceful structure in a dramatic state of deterioration. After establishing the need to comprehensively address building envelope issues, the state of Connecticut assembled a team of professionals to bring this stately landmark back from the brink.

As project manager and project architect, I can say that the two most important factors that brought this complex project together successfully were seamless teamwork combined with outstanding craftsmanship. Examples are just too numerous to share here, but there are some key highlights that illustrate the point.

While the project was complicated by the downtown urban site and active courthouse operations, we were lucky to have a sophisticated client who understood the importance of working together, consultants who were passionate about restoration, and a GC who had the expertise in historic preservation. JCJ Architecture had the privilege of working with the State Dept. of Construction Services as the owner, representatives from Judicial as the operator, and Kronenberger & Sons Restoration as the general contractor.

Key to our success was the state’s insistence on setting a high bar for the qualification of the general contractor with subs. Our collective goal was to bring back the original design intent and to sensitively repair with as much restoration as possible. Because of the historic nature of the building and the sensitivity of operations, the state encouraged development of outline qualifications for subcontractors — setting specific parameters for craftsmen that were to undertake various aspects of the project as well as disqualification of low bidders if they did not have qualified subs in all areas. 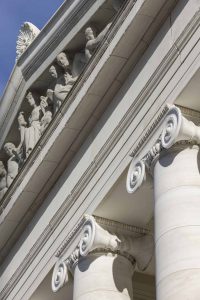 Team problem solving took on a new meaning in this project. While Building Conservation Associates (BCA) research found incomplete drawings, a full survey of the building revealed masonry damage that was far more extensive than first thought. JCJ worked with Hoffman Architects, originally brought on by the state to document emergency repairs and conditions issues, to develop a plan to address immediate concerns. These issues required that the building be immediately encased in scaffolding to protect the public, court personnel, and members of the project team. For example, portions of the Elm Street column capital scrolls — 65 feet off the ground — were crumbling, a condition called “sugaring.” While a new cleaning procedure was developed to stabilize the existing material, the repair process began with a digital scan and offsite fabrication of new material in Wisconsin. Stone carvers employed a Dutchman repair method in which they carefully removed the damaged portions of column capitals, attached new material, and refined the marble work with hand tools. The work of these individuals was nothing less than spectacular.

On numerous occasions, the entire team rallied to develop strategies that would address immediate safety concerns and then to determine the proper way to move forward. This focus on teamwork and collaboration was crucial to our success, but it would have fallen short if not for the incredible work brought by the many craftsmen, architects, and engineers who dedicated themselves to the successful completion of the first phase of repair to this landmark building. 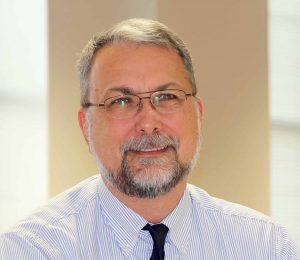