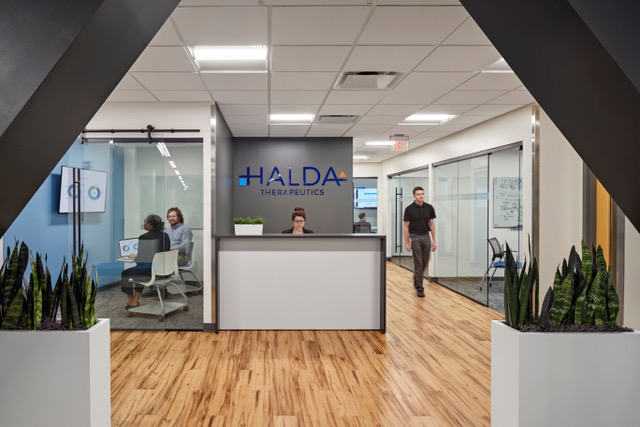 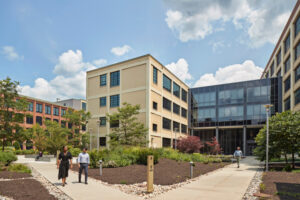 Halda’s new home base occupies the ground floor of the former Winchester Arms factory, originally built in the late 19th century. The office area accommodates 24 employees, separated by a glass-enclosed conference room from the laboratory’s 40 wet benches outfitted with sinks and fume hoods. It includes glass partitions spanning the length of the headquarters.

“Halda’s leaders are not concerned about casual glances into their office or labs,” says Svigals + Partners architect, Omarys Vasquez, AIA, NOMA. “The information they consider sensitive is mostly digital, which we helped to protect by treating glass in sensitive locations with a film that obscures images on screens, including the full-height glazed enclosure of the conference room.” 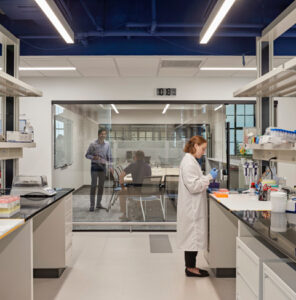 The design team focused on solutions for infrastructure upgrades needed for the laboratory use, including the installation of a three-foot-wide shaft that would direct venting to new air handling equipment installed on the roof.

“Halda’s decision-makers were open to some unusual suggestions, which we loved,” says Svigals + Partners director of interior, Katherine Berger. “They let us introduce open ceilings in the labs, which is rare, painted with a brand-inspired blue accent color. The same blue accent can be found around the workstations, meeting rooms and huddle areas.” In addition to this unusual ceiling treatment, Berger and Vasquez also addressed the issue of two massive sloping structural beams in the reception area by introducing two standing planters, focusing traffic flow between the beams, while adding warmth, color, and a biophilic element. 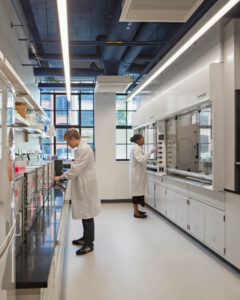 According to Svigals + Partners partner and principal, Bob Skolozdra, AIA, LEED AP, Halda’s leadership and staff are very happy in the new space and are already looking at the rest of the first floor and thinking about how to expand to accommodate expected short-term growth.