Boston – MassDevelopment announced the availability of funding for a new round of the Commonwealth Places program, a statewide initiative that leverages public support for placemaking projects in Massachusetts. The program funds place-based, community-driven projects that revitalize downtowns and neighborhood commercial districts, such as outdoor dining spaces, pop-up parks and beer gardens, sidewalk retail infrastructure, and more. 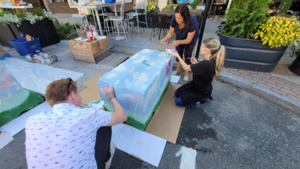 “MassDevelopment’s Commonwealth Places program provides nonprofits and community groups with the resources to implement creative placemaking projects that draw foot traffic in our downtowns and commercial corridors,” said Housing and Economic Development Secretary Mike Kennealy, who serves as chair of MassDevelopment’s board of directors. “With this new round, I look forward to building on the program’s successful track record of increasing activity at local shops, restaurants, and other destinations.”

Nonprofits and other community groups can apply to MassDevelopment for seed grants of between $2,500 and $15,000 to fund inclusive community engagement, visioning, and local capacity building that will support future placemaking efforts, or implementation grants of between $5,000 and $50,000 to execute a placemaking project. Seed grants must be matched with local funding or in-kind donations, and implementation grants must be matched with crowdfunding donations. Expressions of interest will be accepted on a rolling basis as funds allow at massdevelopment.com/commonwealthplaces.

Applications for Fiscal Year 2023 funding will also be accepted through Community One Stop for Growth, a single application portal and collaborative review process for community and economic development grant programs that makes targeted investments based on a development continuum.

Created in 2016, Commonwealth Places aims to engage and mobilize community members to make individual contributions to placemaking projects, with the incentive of a funding match from MassDevelopment if the crowdfunding goal is reached. Through its first six rounds, Commonwealth Places has launched 132 projects in Massachusetts, with communities crowdfunding more than $3.1 million and MassDevelopment providing more than $2.9 million in matching funds.

MassDevelopment will host an informational webinar about the program on Jan. 24. Click here to register.