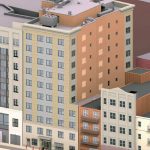 Boston – MassDevelopment has issued a $14.6 million tax-exempt bond on behalf of CEDC Oxford Ping On LLC, which will use the proceeds to build a 10-story building on Oxford and Ping On Streets in Boston’s Chinatown neighborhood on a site currently used as a paved parking lot.

CEDC Oxford Ping On LLC is an affiliate formed by Chinese Economic Development Council, which works to enhance the economic development of the Chinese community in Boston, and helps low-income Asian residents of Chinatown achieve economic and social self-sufficiency by developing affordable housing, incubator office space, and employment training programs.

In addition to the tax-exempt bonds, MassDevelopment assisted the Massachusetts Department of Housing and Community Development with the approval of federal low income housing tax credits, which provided approximately $10.9 million in equity for the project.