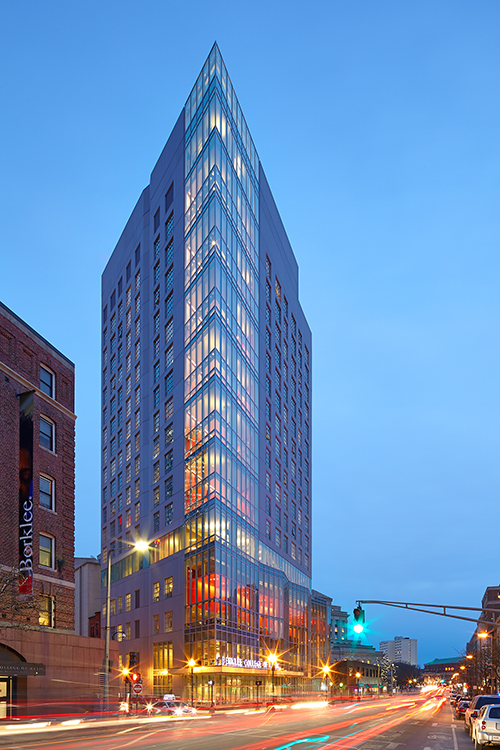 Boston – Berklee College of Music has unlocked the doors to its first building ever constructed from the ground up at its Boston campus. The 16-story tower at 160 Massachusetts Avenue contains 173 dorm rooms for 369 students, 23 practice rooms, six two-story common areas, a fitness center, and a 400-seat dining hall that doubles as a performance space. A 10-studio music production complex that is among the largest of its kind in the United States and nearing final installation is located floors below grade. Total cost of the entire project is approximately $100 million. The project broke ground in 2011.

The building is meant to create connectivity between Berklee and the city, and the city to Berklee. Its first three floors are wrapped in glass, offering the public full view of evening events in the new two-story performance space. Twelve stories of windows make up one corner of the building, bringing sweeping vistas of Greater Boston into the six two-story common areas. Dorm rooms, which are mostly doubles, have loft-like windows. Already, students are using the views from the building as backdrops in their music videos.

The two stories below grade is a cutting-edge, 10-studio, 14,000 sq. ft. music production, technology, and learning complex designed by the seven-time TEC Award-winning Walters-Storyk Design Group (WSDG). It features three recording studios, a live room for up to 55 musicians, isolation booths large enough for a grand piano, a mastering/critical listening lab, a suite of four project studios, and a music technology lab.

The building’s design emerged from the college’s vision for providing state-of-the-art living and learning facilities, and community forums organized by President Brown and architect Rawn where students advocated for increasing practice and production facilities and common areas.