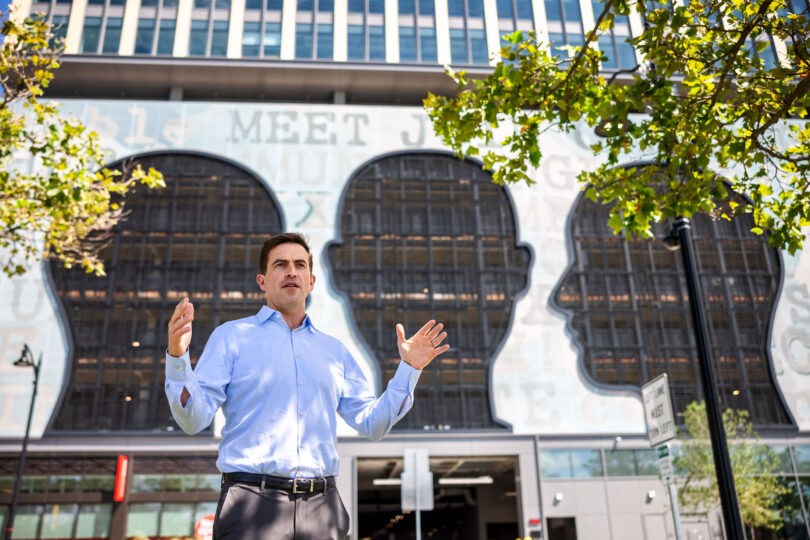 Located between Canal Street and Foley Street, on the neighborhood’s newest office tower, the 6-story high, permanent public art installation is the newest of a series of art activations added to Assembly Row. This “new-media” art wall is a giant LED screen in the shape of three heads looking left, right, and center. The heads represent the coming together of ideas, people, and communities.

The Conversation is a multi-artist media facade with digital artworks shown in sequence throughout the day and night. The canvas puts conversation on display, and provides a place where local, regional, and national artists can showcase thought-provoking and forward-looking content.

The digital canvas will feature a series of local artists which will be showcased in sequence over the coming months. The first artist team is Studio HHH, a Somerville-based, all-female team, led by artist and designer Vanessa Till Hooper. The next artists in the series will be Peter Zebbler, a local icon of the projection art community; Cedric “Vice 1” Douglas, an established muralist and creator of “The People’s Memorial Project;” Pamela Hersch, a local multidisciplinary projection artist; Callie Chapman, a Somerville resident and established dancer, choreographer and digital artist; and Bruce Rosenbaum, a specialist in Steampunk aesthetic.

The execution of this large-scale architectural undertaking was possible because of a partnership with Design Communications Ltd., who worked with the design team, Street-Works Studio, from the early stages of project feasibility through technology integration.

“The Conversation continues to build on Federal’s commitment to public art throughout Assembly Row while taking that effort to another level of visibility and permanence,” said David Middleton, general manager for Federal Realty at Assembly Row.