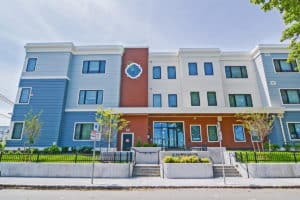 50 York Street is restored after a devastating fire.

Boston –  NEI General Contracting has completed construction of a three-story building at 50 York Street in Cambridge for Just-A-Start Corporation, a community development corporation dedicated to building the housing security and economic stability of low- to moderate-income people in Cambridge and nearby communities.

In 2016, firefighters battled a 10-alarm fire in the Wellington-Harrington neighborhood of Cambridge. The blaze jumped from building to building and ultimately involved 18 buildings, including St. Patrick’s Apartments.

Built in 1909, St. Patrick’s Church was converted to affordable housing in 1991. It featured a large, open bell tower and several stained-glass windows. Built on the footprint of the former building, the newly constructed 50 York Street has restored 16 affordable housing units to replace those destroyed by the fire.

The building was designed by Winslow Architects to reflect the scale and style of the triple-deckers typical of the surrounding neighborhood. The project was completed in May 2019 and is currently occupied by the original tenants.

“Just-A-Start is proud to include NEI on the list of partners who all worked together to rebuild 50 York Street after the devastating fire in December 2016,” said Deborah Ruhe, Just-A-Start’s executive director. “Thanks to the team that worked together for over two years after the fire, we have been able to rebuild the 16 affordable units and provide 16 families with safe, affordable homes for their families.”

“ NEI has such a strong reputation and track record with similar projects and, with their experience and capacity, we were excited to celebrate the York Street Ribbon Cutting on June 27,” she said. “The rebuild of 50 York Street is a part of Just-A-Start’s larger Consolidation Project, preserving a total of 112 affordable housing units at sites across Cambridge.”