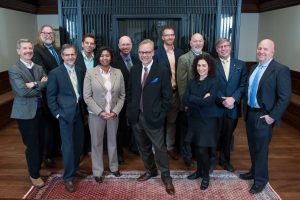 Donadio and Scheib will be based in the Middletown, Conn. office; Torizzo in Providence, R.I.; Herchenroether and Kwasniewski in the Newport, R.I. office; and Bailey-Green in Washington, D.C.

NCA Principal Bianco says, “We are extremely pleased to announce this major expansion of our leadership team that recognizes these very talented architects and their commitment to the future of our practice.  All of the original founders are very proud to have mentored the new principals from the beginnings of their careers to the point where they can share in managing the firm and developing new business.”

Donadio joined NCA in 1997.  He earned a B. Arch from Roger Williams University and taught Architectural Design Studio at RWU for two years.  He is licensed to practice in Conn.  He was recently the project manager for the Glastonbury Riverfront Park Boathouse in Glastonbury, Conn.  The recreational project earned the 2014 Associated Builders and Contractors Excellence in Construction Award.  Donadio’s community work includes the Chairperson responsible for coordinating CANstruction, an AIA Connecticut community outreach event.

Scheib joined NCA in 2008.  He earned a B. Arch from Oklahoma State University. He is licensed to practice in Conn. and Massachusetts.  Scheib was recently the Project Manager for the Regional 18 School District Lyme/Old Lyme High School in Old Lyme, Conn.  This addition and renovation project earned the 2014 AIA Rhode Island Educational Facilities Design Award. He is the Hartford, Conn. Chairperson of the ACE Mentor Program, which is a national program that provides career direction to high school students in the fields of Architecture, Construction and Engineering and was selected to speak about designing learning environments for the 2013 AIA CAE Conference.

Torizzo joined NCA in 2011. She earned a B.S. in Historic Preservation and a B. Arch from Roger Williams University. She is licensed to practice in Conn. and R.I. and is a member of the National Trust for Historic Preservation. Torizzo recently served as the project manager for the Micro Lofts at The Arcade Providence in Providence, R.I.  This innovative adaptive reuse project earned seven awards including the 2014 National Trust for Historic Preservation Award, 2014 Multi-Housing News Award and the 2013 AIA Rhode Island. Award. Torizzo’s community work includes Team Captain of CANstruction, an AIA Rhode Island community outreach event.

Herchenroether joined NCA in 2000. He earned a B.A. in Architecture from Miami University and a M. Arch from Roger Williams University.  He is licensed to practice in R.I. Herchenroether recently served as the project manager for the Audrain Building and Audrain Auto Museum in Newport, R.I. The adaptive reuse project earned the 2014 AIA R.I. Award for Institutional Design, the 2014 AIA R.I. Award for Commercial Design, and the 2015 American Institute of Steel Construction National Certificate of Recognition.

Herchenroether’s community work includes Providence City Arts, Newport County YMCA and Aquidneck Land Trust. Kwasniewski joined NCA in 2001.  He earned a B.S. in Architecture from Roger Williams University. He taught first year and third year design studio at RWU for 15 years. He is licensed to practice in R.I., Mass. and New York. Kwasniewski recently worked as the Project Manager for the Cliffside Inn in Newport, R.I.  This boutique hotel project earned the 2014 Doris Duke Award.   His community work includes volunteering for the  Newport, R.I. Building Code Board of Review.

Bailey-Green joined NCA in 2001. She earned a B. Arch from Hampton University and is licensed to practice in Conn., Maryland, Virginia, and Washington, D.C. She was recently the project manager for the East Bay Community Health Center in Newport, R.I.  The project earned the 2014 Associated Builders and Contractors Excellence in Construction Award. Her community work includes CANstruction, an AIA Washington, D.C. community outreach event.