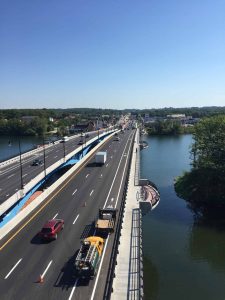 Shrewsbury, MA – Moulison Heavy Electrical, based in Biddeford, Maine, has completed the state-of-the-art LED lighting and lighting control system of the arches and handrails at the Kenneth F. Burns Memorial Bridge on Route 9, which connects Shrewsbury and Worcester over Lake Quinsigamond.

The under-bridge lighting project, composed of 64 rectangular LED spotlights installed on the piers of the bridge, was handled by the Moulison crew working on a barge. Dynamic lighting control settings are achieved by a controller located at the bridge or by MassDOT via a laptop.
The project also entailed Moulison’s installation of surrounding traffic signals and roadway lighting.
Middlesex Corp. was the general contractor for the project.
Due to the high-traffic location, much of the electrical work was done on after rush hour, between 8 p.m. and 6 a.m.
Moulison Heavy Electrical’s project manager Dave Power supervised a crew of eight Local 96 electricians in the project, which spanned over three years commencing in August 2012, with completion reached in early 2016.